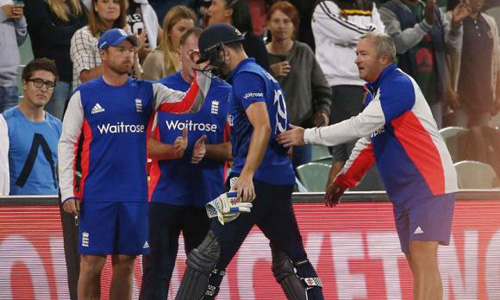 SYDNEY - Under-fire England held their first news conference since being knocked out of the World Cup on Wednesday with inexperienced all-rounder Chris Jordan handed the responsibility of addressing the media on behalf of the squad. Former players, media, TV pundits and cricket fans have directed a wave of invective at the players and England's cricket chiefs since the side were bounced out of the tournament by defeat to Bangladesh in Adelaide on Monday. Given Jordan made his only World Cup appearance in his 21st one-day international match in the 15-run loss, he was understandably at something of a loss to explain what had gone so badly wrong in the campaign. "It's so hard to put a finger on exactly what it is," he told reporters at the Sydney Cricket Ground, where England face Afghanistan in their final pool match on Friday. "I thought we prepared as best as we possibly could both mentally, physically and technically coming into the World Cup. "In the Tri-series we beat a team that's flying high at the top of their table in India, and we came in with real good confidence and real high hopes." Equally understandably, the 26-year-old was not going to join the loud media chorus calling for England coach Peter Moores and, to a lesser extent, captain Eoin Morgan to be sacked. "Pete and Morgy have, effectively, had a great partnership thus far," he added. "They've prepared everyone as best as they possibly can and then simply we just went out there and didn't perform as well as we (could). That's gutting. "But Pete, I think, has done a brilliant job, comes in with enthusiasm every day and gets the boys up for training, gets the boys up for games. "It's just a bit disappointing that us as players didn't put in the performance we should have done. That's all I can say really." After going out of the World Twenty20 in the pool stage last year, England rounded out their campaign with defeat to minnows Netherlands in a dead rubber encounter. Jordan said England were determined that would not happen on Friday against World Cup debutants Afghanistan, who are also already out of the reckoning for the knockout stages. "I think first and foremost you want to get back on the horse quite quickly and try to put in a performance that rectifies what we did the other night. That's the only way to deal with it at the minute," he said. "Everyone is gutted, gutted for the fans that came over and the fans at home watching. "Friday is just an opportunity first of all to put that right, and get back on the horse and just put in a good performance for England." – Reuters