RAWALPINDI (92 News) – Chief of Army Staff (COAS) General Raheel Sharif visited forward most locations close to Pak-Afghan border in North Waziristan Agency (NWA) on Thursday. The COAS was briefed in detail by the formation commander about progress of Operation Zarb-e-Azb and future plans to clear the remaining pockets of terrorists in Shawal area. Later talking to fighting troops who have just successfully completed the preliminary phase of Shawal operation and cleared all peaks around Shawal, the COAS commended their professionalism, sacrifices and state of high morale so visible through their operational gains. “It's a matter of great privilege and honour to be commanding such an accomplished and battle hardened Army,” the COAS re-emphasized. Appreciating special integrated teams which have carried out Intelligence Based Operations (IBOs) across urban areas of Pakistan and severed links between terrorist’s sanctuaries in remote areas and their sleeper cells in cities, he directed all concerned to continue these operations to apprehend all terrorists, their facilitators, abettors and financiers from anywhere across the country without any discrimination and irrespective of the cost. "We will not stop unless we achieve our end objective of a terror-free Pakistan." COAS General Raheel Sharif also visited WANA, South Waziristan Agency (SWA) where he was briefed on the ongoing rehabilitation work, and its effects on the social landscape of area, particularly the relief that they bring to all residents of these regions. Commending the noteworthy effects of already completed numerous small scale and mega projects, he underscored the importance of capitalizing operational gains to bring lasting peace and prosperity to the region. Acknowledging the hardships and sacrifices of TDPs, the COAS asked all stakeholders to ensure TDPs' expeditious and dignified return to a better built and rehabilitated areas for long-term stability on the bordering regions of Pakistan. He reiterated that Army will fully participate to assist in completing all development projects in time. Earlier on arrival, the COAS was received by Corps Commander Peshawar, Lieutenant General Hidayatur Rehman. 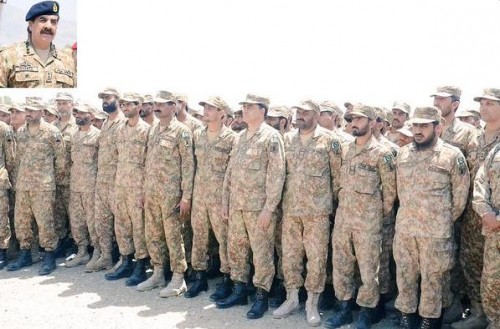