Shehbaz, Bilawal vow to vote against federal budget in NA 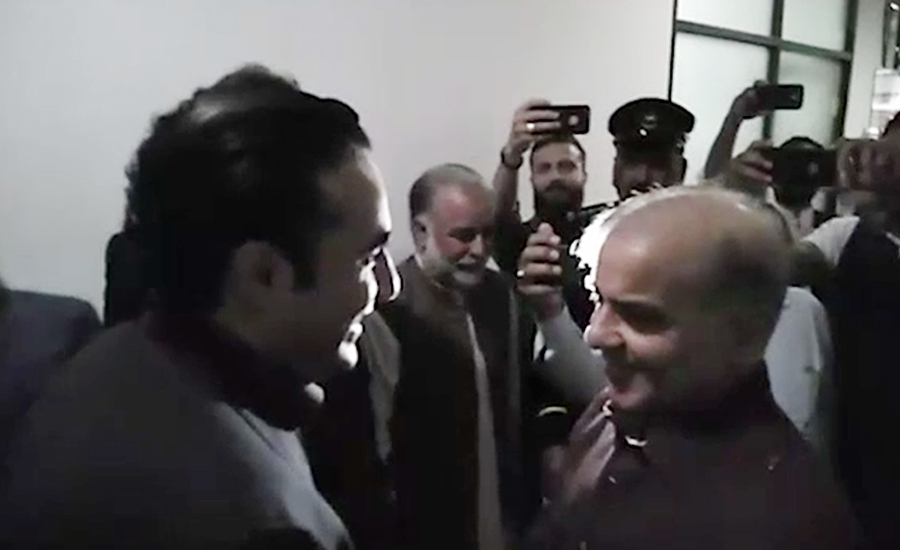 Shehbaz, Bilawal vow to vote against federal budget in NA

ISLAMABAD (92 News) – Opposition Leader in National Assembly Shehbaz Sharif and Pakistan Peoples’ Party (PPP) Chairman Bilawal Bhutto Zardari vowed to vote against ‘anti-public’ budget in the parliament session. The opposition parties held a meeting in the Parliament House moments before the All Parties Conference on Wednesday. Both the leaders – who entered the Parliament House together – discussed joint strategy at the joint sitting of opposition to counter the federal budget in the ongoing budget session of NA. During the meeting, the opposition decided to present cut motions regarding budget in the session. Speaking on the journalists, after the meeting, Bilawal Bhutto said that the government wanted to get the budget approved through rigging so the entire opposition would be voting against its approval. The PPP held its party’s consultative meeting before the joint sitting of opposition. https://www.youtube.com/watch?v=0peIX1nyPN4 All Parties Conference (APC) will be held in Islamabad today under the chair of Jamiat Ulema-e-Islam-Fazl (JUI-F) chief Maulana Fazlur Rehman.

According to the reports, the APC will host the representatives of opposition parties to formulate a joint strategy for future course-of-action against the ruling Pakistan Tehreek-e-Insaf (PTI) government.

The reports also said that the APC would also discuss the matters related to change of senate chairman.

The PPP announced a five-member delegation to attend the upcoming all parties’ conference. Pakistan People’s Party (PPP) has decided to send a five-member delegation to attend the APC. The decision regarding PPP chairman Bilawal Bhutto Zardari’s participation in the All Parties Conference or otherwise will be taken in the PPP parliamentary party meeting today (Wednesday). The PPP delegation comprising Syed Yousaf Raza Gilani, Nayyer Bokhari, Raza Rabbani, Sherry Rehman and Farhat Ullah Babar will attend the All Parties Conference.