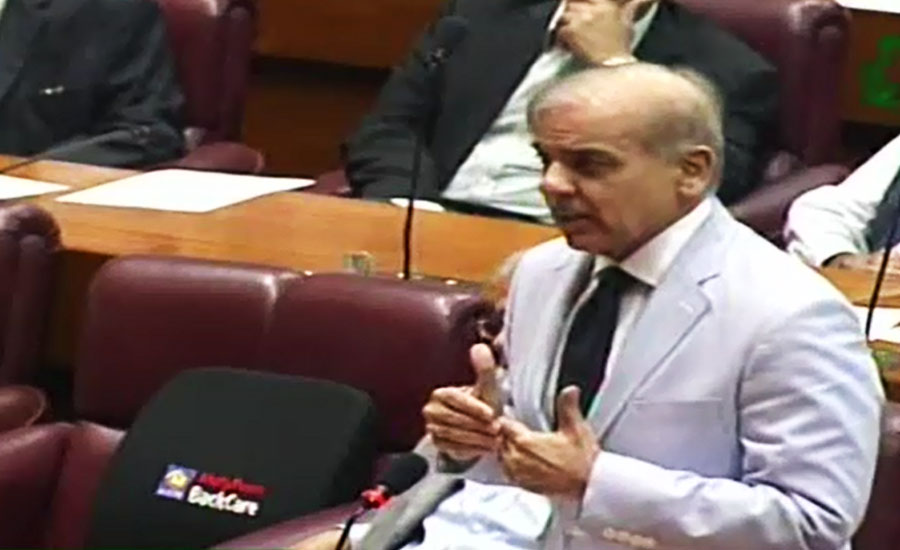 ISLAMABAD (92 News) – Opposition Leader in National Assembly Shehbaz Sharif said that Shehbaz Sharif demanded the NA speaker to issue production orders for arrested Pakistan Muslim League-N (PML-N) lawmakers. Speaking to the session of National Assembly, the PML-N president said that many members of the parliament were not present during the session on Monday as their production orders have not been issued. He then referred to Deputy Speaker Qasim Suri and said that he should’ve ensured the presence of all the members. “All the members should be present so that they can make their positive contributions in parliament.”

Shehbaz Sharif strongly condemned the terrorist attacks, in which ten Pakistani soldiers martyred. He said that Foreign Minister Shah Mehmood Qureshi should take the house into confidence over martyrdom of Pakistani soldiers.

The PML-N president claimed that PML-N leader Rana Sanaullah is being kept in lonely detention. “There is no bed, mattress, ‘charpoy’ or chair in his cell, he has no option but to sleep on the floor,” he added. Shehbaz said that only Sanaullah’s wife, daughter, and son-in-law are allowed to meet him and no one else. “This treatment is not meted to even the enemies,” he said. Shehbaz Sharif also claimed that barricades had been erected to prevent him from meeting Sanaullah at the court today. He further said that Rana Sanaullah and Shahid Khaqan Abbasi forbid him to ask the NA speaker for their productions orders.

The former Punjab chief minister condemned the arrest of Irfan Siddiqui, a former aide to Nawaz Sharif, questioning why he was taken into custody before being released on bail. “I wanted to him in jail but my request was denied. When I tried to meet him in court, the government made that really hard too.” https://www.youtube.com/watch?v=KuoKm6Bm6P8