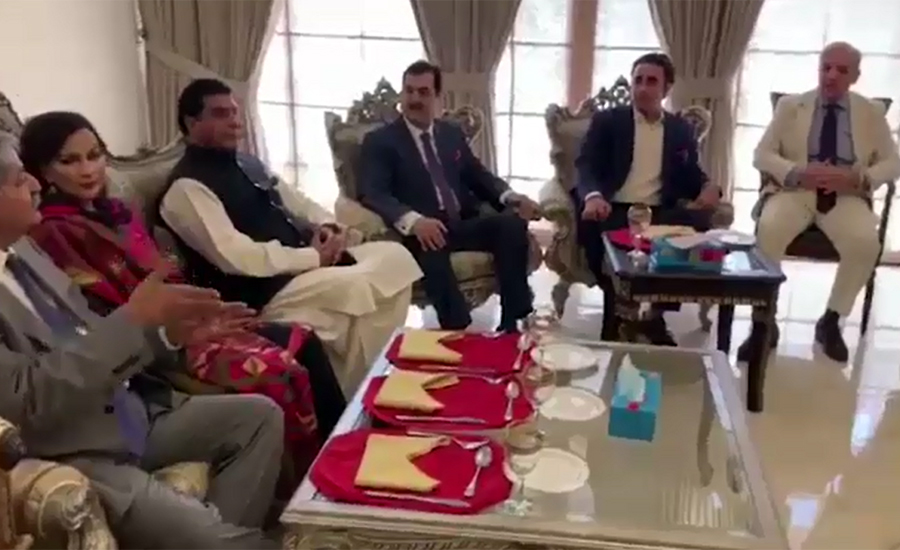 ISLAMABAD (92 News) – Opposition Leader in the National Assembly Shehbaz Sharif and PPP chairman Bilawal Bhutto exchanged their views about the Azadi March. During the two-hour meeting, both opposition leaders also discussed the arrests of the opposition leaders. They also discussed the lockdown of Maulana Fazalur Rahman. On the other hand, the PPP has decided to give the government a tough time. Meetings and rallies will be taken out across the country. https://www.youtube.com/watch?v=w2iFfQ3zghM Earlier upon their arrival at his residence, Shehbaz Sharif welcomed PPP chairman Bilawal Bhutto Zardari and other PPP leaders. Talking to the media after the meeting, PML-N leader Ahsan Iqbal said that the government had not come into the power with mandate. He said that the nation should get rid of a novice bus driver throwing the country into ditches time and again. “The rulers are playing with the destiny of the country,” he said. “Independent and justified elections are the only solution to bring the country of the blind alley.” He said that all parties are united against the government. “It is mandatory to send the government home. The GDA, the MQM and PML-Q have also complained of rigging,” he said. The PML-N leader said that the opposition parties would jointly forward the continuity of democracy. He said that the entire nation is standing with the Kashmiris. PPP Senator Sherry Rahman said that they did not want to derail democracy. “The rulers do not consider the parliament. They want to lock the parliament, but we will not let them do so,” she said. She said that the PPP had always supported the constitution. “We will not take the solo flight. We will try to support Maulana Fazlur Rahman,” she said. Sherry Rahman said that the rulers want to run the country through the ordinance and the executive order. “The IMF and the government are same,” she said. She said that the United Nations should be reminded of its promises. “The POL prices could not be reduced despite recommendations of the OGRA,” she said. She was of the view that the tsunami of inflation is going on unchecked.