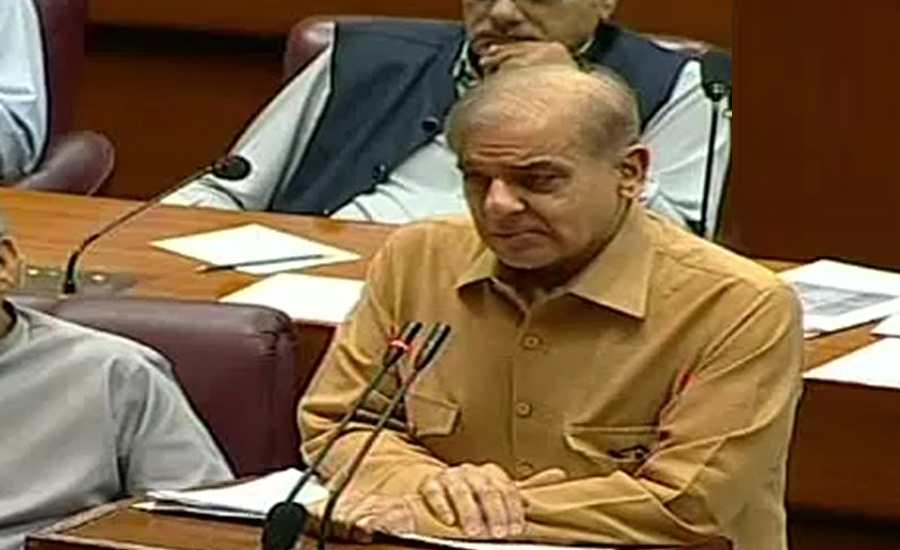 ISLAMABAD (92 News) – Rejecting government’s proposed new budget, Leader of Opposition in National Assembly (NA), Shehbaz Sharif demanded the federal government to withdraw its budget and present again after reviewing. Following a week of continuous ruckus in the NA, Sehhbaz Sharif finally got an opportunity of delivering an uninterrupted speech – as the government and the opposition appear to have agreed to not interrupt the debate on the upcoming federal budget 2019-20. While opening the debate on the budget in National Assembly, the opposition leader said that the PTI-led government’s budget has brought the message of disappointment to the general public and has rejected the federal budget for 2019-20, presented by the government, last week. Shehbaz rejects the government’s proposed budget as terming it as the ‘country’s enemy’. “The new budget has deprived masses of their rights, we reject it,” Shehbaz said, criticizing that the PTI’s ten-month performance in government saying the price hike has added to the woes of the common man.

70 % indirect tax imposed in next budget

Shahbaz Sharif said focus of budget should have been employment generation, reduction in inflation, GDP growth, bolstering exports and ensuring socio-economic justice. He said all these elements are missing in the budget. He said the government has imposed seventy percent indirect taxes in the next budget which will burden the common man. The opposition leader said that Pakistan Tehreek-e-Insaf had promised to construct five million houses but has not allocated any amount in the budget for this purpose. He also expressed concerns over raise in the gas and power tariff. He said government has not provided any relief to the farmers in the budget.

Shahbaz Sharif demanded that the minimum wage of the employees should be fixed at 20 thousand rupees per month. He said the salaries of government employees up to scale sixteen be enhanced by 50 per cent. Shahbaz Sharif said additional taxes imposed on ghee and edible oil should be withdrawn. He said allocations for education and health be enhanced. He also demanded revival of zero rated facility for the export oriented industry. https://www.youtube.com/watch?v=oi8glEqWOZE

The opposition leader also claimed that the budget was not formulated with the consultations of the International Monetary Fund (IMF), rather it was made by the IMF itself. “The US dollar has spiked to Rs157, and by the time my speech is over, it could even reach Rs160…I want to inform how time [of the general public] has been wasted,” he said. He said the PTI had made big claims of turning around the economy and bringing revolution in the lives of people but it failed to deliver, after coming into power. “Those who claimed to build ‘Naya Pakistan’ have turned heaven into the hell. He said the government’s policies have resulted in the closure of factories and industries which have rendered millions of people jobless, which has worsened the situation more. https://www.youtube.com/watch?v=W-2iZgIveLs

The PML-N president said that the incumbent government has taken five thousands billion rupees loan and did not put a single brick till now. “If this government rules one year more, it may cross the amount of loans from our tenures,” he added. Shehbaz said PM Khan claimed to take revenue collections of the country to 8000 billion rupees when he was on the container, but after coming into power he failed to collect half of the amount. “We addressed enormous challenges such as that of load shedding and terrorism and achieved the growth rate of five point eight percent and brought the inflation to the record three percent,” he said while recalling the performance of PML-N.

Collective efforts to steer country out of economic challenges

PML-N reduces inflation from 12 to 3 per cent

The PML-N leader said that when the PML-N got into power, the inflation rate was 12 percent and they reduced it to three percent with endless hardwork. He said that the PML-N government focused on education, building 40 universities, and increasing budget for higher education commission to Rs47 billion. Shehbaz Sharif said that the poor of the country are also protesting and want to know why free medicines are not being provided.

A parliamentary delegation of Iran also witnessed proceedings of the house. Both the treasury and opposition benches welcomed the delegation by thumping of desks.