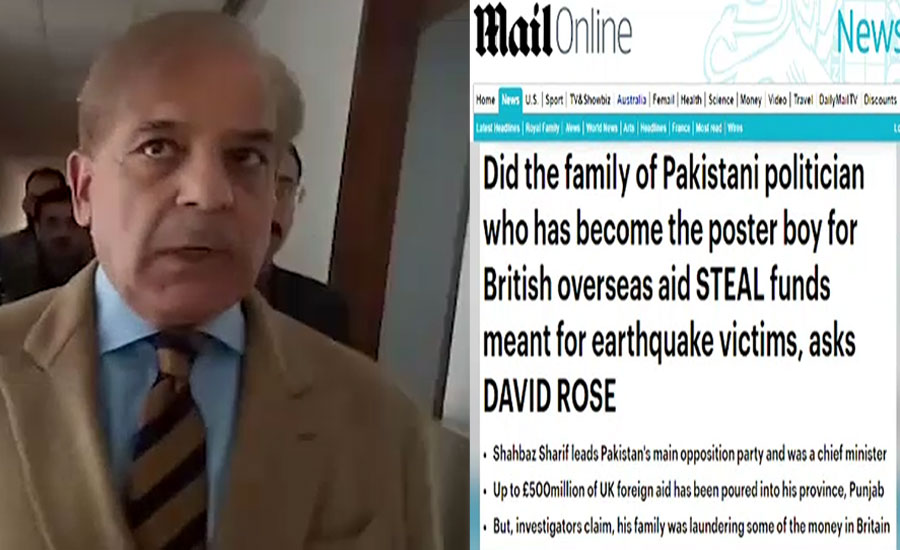 LONDON (92 News) – Opposition leader in National Assembly and Pakistan Muslim League-N president Shehbaz Sharif has served a legal notice to the UK-based newspaper “Daily Mail” and its journalist David Rose about a alleged article published on July 14, 2019. Responding the allegations of UK newspaper, the opposition leader took a legal action and sends legal notice over defamation. The PML-N president sued ‘Daily Mail’ claiming Shehbaz Sharif allegedly laundered Britain’s aid worth millions of pounds reserved for the rehabilitation of earthquake victims during his tenure as Punjab chief minister. It was also reported that Shehbaz Sharif’s case will be fought by renowned British law firm Carter-Ruck. Moreover, Shehbaz has also confirmed the news about suing the paper and the story publisher in a tweet.

Have served legal notice to the DailyMail. Details in the attached image pic.twitter.com/rT4FHcXefB

According to the reports, Carter Ruck confirmed that it has agreed to act on behalf of Shebhaz Sharif after reviewing the case for a week. Papers show that Alasdair Pepper, Antonia Foster and Victoria Anderson will represent Shehbaz Sharif in his legal claim against the publication. Carter Ruck said: “The article is gravely defamatory of Mr Sharif, including false allegations that he misappropriated UK taxpayers’ money in the form of DFID aid intended for the victims of the devastating 2005 earthquake in Pakistan. Mr Sharif denies these allegations in the strongest possible terms.” Shehbaz Sharif’s English lawyers said in a statement on Friday morning that he was “utterly appalled by these allegations”. Shehbaz Sharif said: “It is disgusting for the Mail to claim that I stole money from a fund for earthquake victims. Clearly were there any evidence in support of this, or any of the other allegations contained in the article against me, then I would have been arrested and charged. This appears to be yet another politically motivated campaign against me and my family by the current government of Pakistan. According to the article, it granted the journalist ‘exclusive access to some of the results of a high-level probe ordered by Khan’ including a ‘confidential investigation report’ and highly unusually access to ‘interview key witnesses held on remand in jail’.” The matter has been raised by a UK MP in parliament as well. The parliamentarian said that the UK needs to take measures to see how Pakistan has spent the aid it has been receiving.