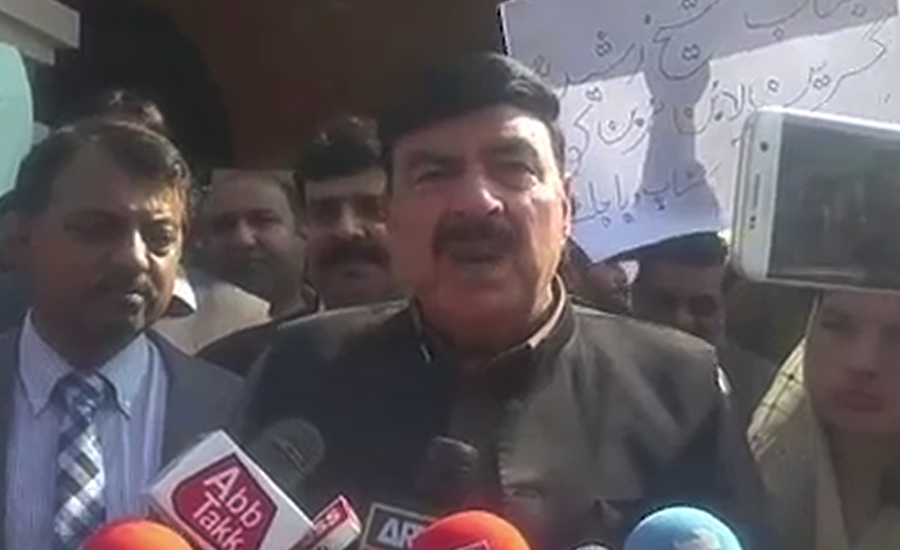 LAHORE (92 News) – Federal Minister for Railways Sheikh Rasheed said on Sunday that Opposition Leader in National Assembly Shehbaz Sharif is making effort to get a deal. Speaking to the journalists, the minister criticized the oppositions and said that ‘deal or no deal’ will be given to anyone. He said that Shehbaz Sharif is asking for a deal and this is being processed only 50-50 till now. Sheikh Rasheed claimed that Shehbaz Sharif offered to quit Public Accounts Committee (PAC) chairmanship for a deal. He also said that the thieves, looters and dacoits have destroyed the economy of the country. Lashing out Pakistan Peoples’ Party (PPP) Chairman Bilawal Bhuttoo, he said that if Bilwal tried to become Asif Ali Zardari then his political career would be ruined. He also said that Shehbaz Sharif feared from him as the PAC member. During the clean and green campaign, the railways minister visited Lahore Cantt, Radha Kishan, Okara, Sahiwal and other railways stations. Later, on his arrival to Okara Railways Station, the railways employee staged protest on their demands and Sheikh Rasheed left the place without hearing the demands of employees.

A day earlier, Sheikh Rasheed has termed former prime minister Nawaz Sharif a coward politician. He said that Nawaz Sharif is trying to become a hero in the corruption cases. “The Sharif family spares their diseases for easiness in their bail,” he maintained. Sheikh Rasheed said that the deal will totally fail, but there are 50-50 chances of relaxation. “It is pity that Shehbaz Sharif wanted in 23 cases will hold the nation accountable,” he said. Commenting on the announcement of a long march by PPP chairman Bilawal Bhutto, Sheikh Rasheed demanded that Shehbaz Sharif should be stripped of security by the Rangers. “There is a big difference between ‘Long Gwacha’ and a log march,” he said.Earlier, the minister visited the Lahore Reservation office and admitted that there is shortage of staff in it, assuring that the staff shortage will be removed soon. He said that the salaries of the railway police will be equalized with the Punjab police. “There is shortage of facilities for passengers in trains. Employees will be upgraded,” he said.
Sheikh Rasheed asked Prime Minister Imran Khan to take the nation into confidence if any deal with the PML-N and the PPP is in the making through money. “Today, I am making a big disclosure. I also hope that PM Imran Khan will not mind it. There are reports that these two parties, PML-N and PPP, are paying money for striking a deal with the government. If it is true, please take the nation into confidence,” he said.