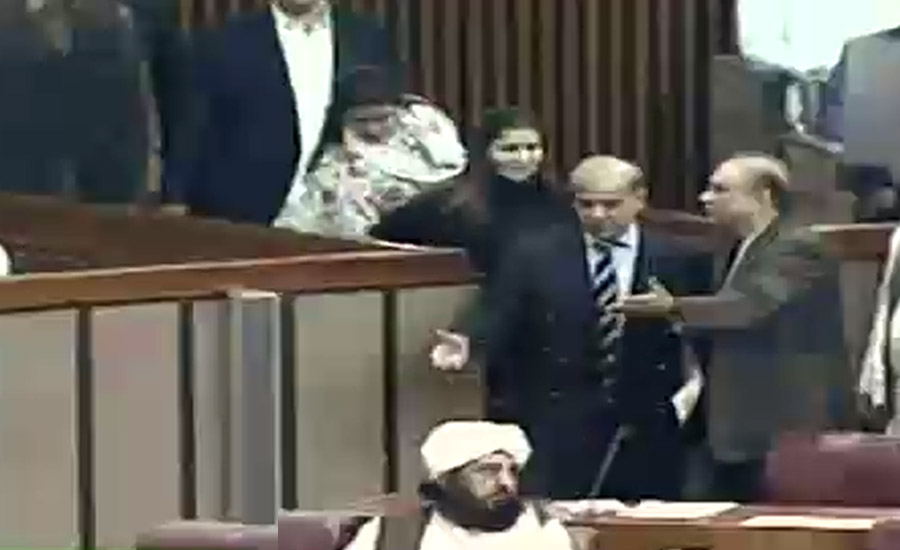 ISLAMABAD (92 News) – Opposition Leader Shehbaz Sharif and Pakistan Peoples’ Party Co-Chairman Asif Ali Zardari entered together in the national Assembly session on Monday. Speaker Asad Qaiser chaired the NA session. However, before the arrival of Shehbaz Sharif, the PML-N leaders had boycotted the session after the National Accountability Bureau failed to bring Shehbaz on time. The leaders recorded their protest and walked out of the session. Meanwhile, Shehbaz Sharif spoke to the journalists inside the parliament and said that he briefly met with Zardari. To a question, Shehbaz Sharif said that he will tell regarding the matter of APC after consultation. “They did not want to bring me,” Sharif commented to reporters about the NAB team. Speaking on the floor of the assembly, Minister for Foreign Shah Mehmood Qureshi called on the opposition to attend the session and present their stance. “The treasury and opposition benches need to sit together and decide how the parliament will work,” Qureshi said. On the other hand, after attending the NA session, former president Zardari left for Zardari House and gave brief responses to the questions of the journalists. The PML-N president is in custody for his involvement in Ashiana housing scam. On October 26, NA Speaker Asad Qaiser issued production orders for Shehbaz so that he can attend today's National Assembly session.