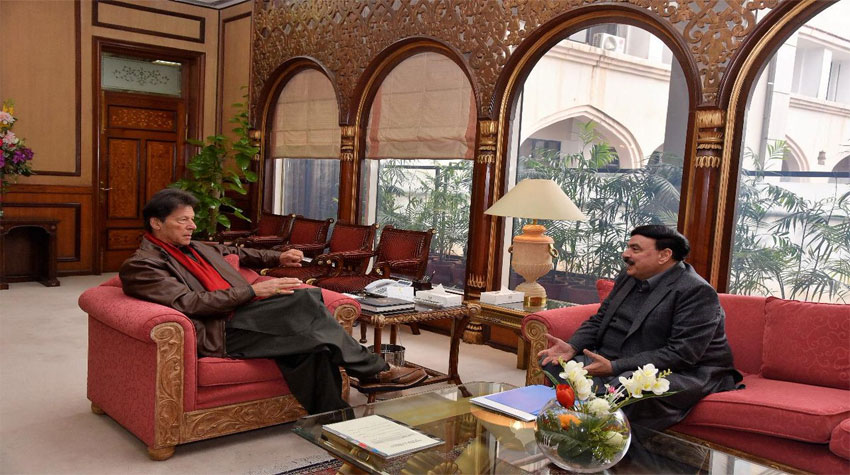 ISLAMABAD (92 News) – Federal Minister for Railways Sheikh Rasheed Ahmed called on Prime Minister Imran Khan on Thursday. They discussed matters relating ministry of railways and important issues including matters pertaining to the all-powerful Public Accounts Committee (PAC). According to the reports, the minister thanked PM Imran Khan for posing trust in him and nominating him as the member of PAC. He also briefed the prime minister about the performance and achievements of Pakistan Railways.

Sheikh Rasheed asks Bilawal to apologies over his remarks

Sheikh Rasheed asked Pakistan Peoples’ Party (PPP) Chairman Bilawal Bhutto Zardari to apologize over his improper remarks. He was speaking to the journalists in Narowal on Monday. Taking jibe at the PPP chairman, the minister said that it would be better for Bilawal to apologize for his offensive remarks against him. Sheikh Rasheed taunted former prime minister and Pakistan Muslim League-N (PMLN) supremo Nawaz Sharif and said that he does not need to go to London for removal of kidney stones because the stone can be removed with spiritual treatment at “Lal Haveli”.

A day earlier, the federal minister  claimed that Opposition Leader in National Assembly Shehbaz Sharif is making effort to get a deal. Speaking to the journalists, the minister criticized the oppositions and said that ‘deal or no deal’ will be given to anyone. He said that Shehbaz Sharif is asking for a deal and this is being processed only 50-50 till now. Sheikh Rasheed claimed that Shehbaz Sharif offered to quit Public Accounts Committee (PAC) chairmanship for a deal. He also said that the thieves, looters and dacoits have destroyed the economy of the country.
Earlier on January 31, the railways minister had asked Opposition Leader Shehbaz Sharif to stay calm as he did not intend to ‘misbehave’ or ‘fight’ with anyone after his inclusion in the Public Accounts Committee (PAC). Rasheed had underscored that he was the most senior parliamentarian of Pakistan and after consultations, he learnt that a minister can become a member of the PAC and “Prime Minister Imran Khan has nominated me in the place of Riaz Fatyana.”