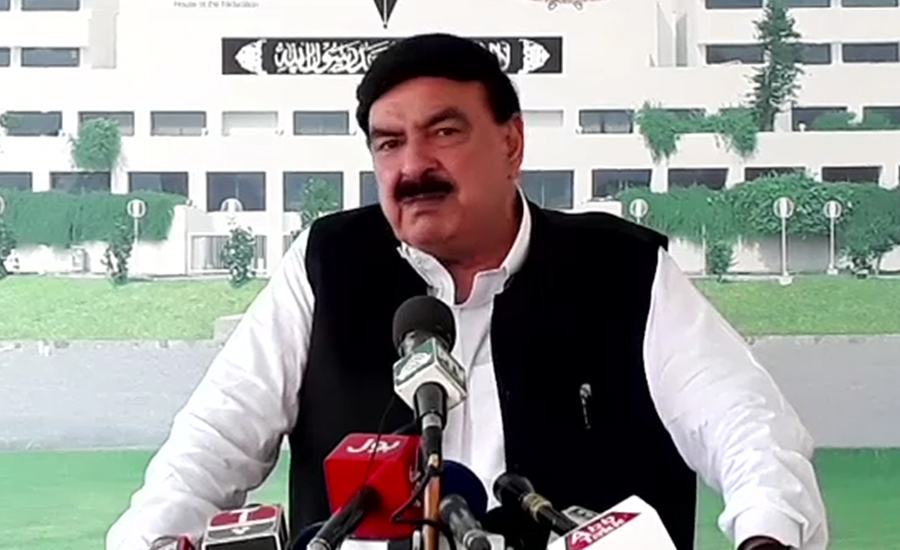 ISLAMABAD (92 News) – Federal Minister for Railways Sheikh Rasheed on Tuesday claimed that he was a conscientious politician and would continue to support Prime Minister Imran Khan. Speaking to the journalists outside the National Assembly, the minister claimed that the Pakistan Muslim League-N (PML-N) has two groups – Nawaz Sharif and Shehbaz Sharif league. He maintained that the nation is paying price for the decisions taken by the previous rulers. Sheikh Rasheed said that calling an elected person as ‘selected’ is inappropriate. “I have repeatedly told them to allow them (Sharifs) to go to London if they want,” he said. “My and Shehbaz Sharif’s mother party is the same, we never change our parties,” he added. The railways minister further said that they cannot sit for 126 days. A day earlier, National Assembly (NA) Deputy Speaker Qasim Khan Suri prohibited usage of word ‘selected’ for the Prime Minister of Pakistan in the Lower House of Parliament. During the NA session on Sunday, Qasim Khan Suri issued the ruling, declaring the use of the word for the Leader of the House in the NA an insult to the entire House. He said using the word for the prime minister was contrary to the rules of procedure and conduct of business. Treasury benches in the NA session today sought to move a privilege motion in the house. Federal Minister for Energy Omar Ayub Khan on a point of order said that the prime minister being repeatedly referred in the house as ‘selected’. He said the prime minister is an elected representative and calling him as selected is breach of the privilege of the house. Deputy Speaker Qasim Khan Suri, who was presiding over the session at the time, in his ruling said that each member has arrived in the house with votes of the people. He said the representatives are themselves insulting the august house. He banned ‘selected’ word repeatedly used by the opposition members for the prime minister. “The members of the house should now avoid to use the word in the house,” the deputy speaker ruled.