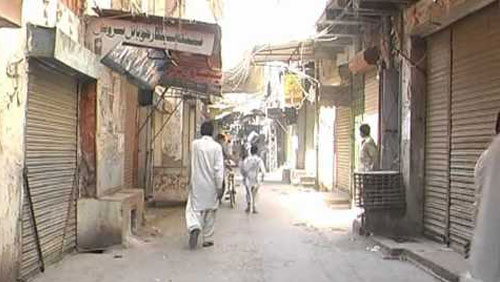 JACOABAD (Web Desk) – A complete shutter-down strike is being observed in Tando Bago, Tilhar, Maatli, Golarchi areas of Badin district in protest against Jan 30 suicide attack on Shikarpur imambargah, 92 News reported on Friday. All markets and business centers have been closed while public transport Badin to Karachi, Mithi and Hyderabad was suspended due to closure of petrol pumps. Some angry protestors took to the streets and burnt tyres on Qazi Wah Bridge. In Jacobabad, all the shops in Sarafa Bazar, Shah Bithai Bazar and cloth market remained closed. At least 60 people were killed in a powerful suicide explosion at crowded Karbala-e-Moalla Imambargah in Shikarpur district of Sindh on January 30.