MUMBAI (92 News) – Hindu extremists of Shiv Sena stormed the office of Board of Control for Cricket in India (BCCI) in Mumbai on Monday during a meeting of Chairman of Pakistan Cricket Board Shehryar Khan with his Indian counterpart Shashank Manohar. The extremists ransacked the office and chanted slogans against the Chairman Pakistan Cricket Board (PCB) and Najam Sethi and demanded their immediate return to Pakistan. Shiv Sena fanatics threatened that they would not allow cricket series between Pakistan and India. They entered Manohar's office and crowded around his desk, shouting slogans and appearing determined to stop him from meeting the Pakistan cricket board chief to discuss a bilateral series in December. Shiv Sena activists told Manohar that BCCI should not resume ties with Pakistan as hundreds of innocent Mumbai citizens lost their lives in the 26/11 terror attacks. Mumbai police have detained around 20 Shiv Sena activists. Police said they have brought the situation under control and beefed up security to ensure the protest does not recur. Talking to 92 News, Awami Muslim League chief Sheikh Rashid said that the Indians had killed 12 innocent Kashmiris when Javed Miandad hit a six, adding that the current India is Modi’s extremist India. Earlier, the Shiv Sena's protests forced the cancellation of legendary Pakistani artiste Ghulam Ali's concert two weeks ago and last week, its activists threw black paint on columnist Sudheendra Kulkarni for organizing the launch of former Pakistan minister Khurshid Mahmud Kasuri's book. The Sena's partner BJP could not prevent the scrapping of the Ghulam Ali concert but Chief Minister Devendra Fadnavis took a firm stand against the attack on Kulkarni. The state government also provided Kasuri protection for the book launch function, which led to friction between the Sena and the BJP. The Indian and Pakistani boards had signed a pact for six bilateral series between 2015 and 2023, beginning with Pakistan's home series in December. 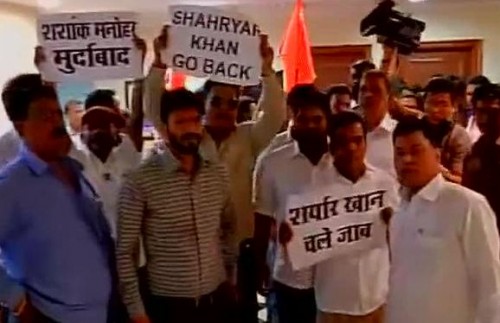