Shock as Trump backs Putin on election meddling at summit 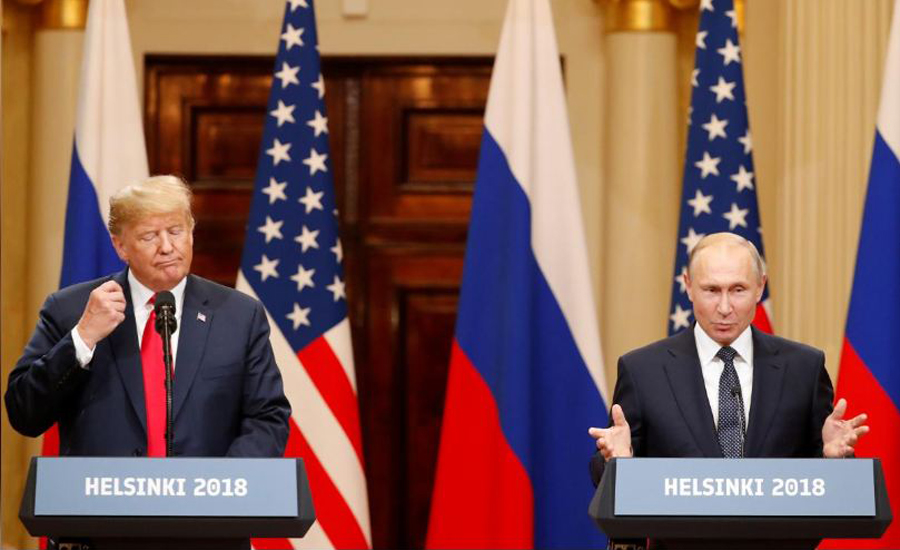 Shock as Trump backs Putin on election meddling at summit

HELSINKI (Reuters) - US President Donald Trump said after meeting Vladimir Putin on Monday he saw no reason to believe his own intelligence agencies rather than trust the Kremlin leader on the question of whether Russia interfered to help him win the 2016 election. On a day when he faced pressure from critics, allied countries and even his own staff to take a tough line, Trump said not a single critical word about Moscow on any of the issues that have brought relations between the two powers to the lowest ebb since the Cold War. Instead, he denounced the “stupidity” of his own country’s policy, especially the decision to investigate election interference. Trump’s performance is likely to create a political storm in the United States, where the White House has struggled for months to dispel a suggestion that Trump was unwilling to stand up to Putin. His performance was denounced as “treasonous” by a former CIA chief and condemned as “shameful” by a Republican senator, although other Republicans were more cautious. Trump held his meeting with Putin just days after a special prosecutor in the United States indicted 12 Russian agents for stealing Democratic Party documents to help him win the vote. Asked if he believed U.S. intelligence agencies, which concluded that Russia interfered in the 2016 election to help him defeat Democratic candidate Hillary Clinton, he said he was not convinced. “I don’t see any reason why it would be” Russia, Trump said. “President Putin was extremely strong and powerful in his denial today.”

Before the summit even began, Trump blamed his own country for the deterioration in relations. “Our relationship with Russia has NEVER been worse thanks to many years of U.S. foolishness and stupidity and now, the Rigged Witch Hunt!” he said on Twitter. The Russian foreign ministry tweeted back: “We agree”. At the news conference, Trump was invited by reporters to offer any criticism of Russia but he repeatedly declined. Asked if Russia was at all to blame for the poor ties, he said: “I hold both countries responsible. I think the U.S. has been foolish. We’ve all been foolish,” he said, before veering into discussion about his election victory. “I beat Hillary Clinton easily and frankly we beat her…We won that race and it’s a shame that there can be even a little bit of a cloud over it,” he said. Trump’s warm words for Russia were a marked contrast from the past week when he repeatedly rebuked traditional U.S. allies at a summit of NATO and during a visit to Britain. Asked if Putin was an adversary, he said: “Actually I called him a competitor and a good competitor he is and I think the word competitor is a compliment.” Putin spoke of the importance of the two countries working together and praised Trump, at one point interrupting the news conference to give the U.S. President a football. Asked whether he had wanted Trump to win the 2016 election and had instructed officials to help him, Putin said “Yes I did”, although he denied any interference, saying the allegations were “complete nonsense”. Republican Senator Lindsey Graham said Trump’s performance would send a message of “weakness” to Moscow. “Missed opportunity by President Trump to firmly hold Russia accountable for 2016 meddling and deliver a strong warning regarding future elections. This answer by President Trump will be seen by Russia as a sign of weakness and create far more problems than it solves,” Graham said on Twitter. Arizona Senator Jeff Flake, a frequent Trump critic, said: “I never thought I would see the day when our American President would stand on the stage with the Russian President and place blame on the United States for Russian aggression. This is shameful.”

Former CIA chief John Brennan went further, suggesting Trump should be removed from office: “Donald Trump’s press conference performance in Helsinki rises to & exceeds the threshold of ‘high crimes & misdemeanours.’ It was nothing short of treasonous. Not only were Trump’s comments imbecilic, he is wholly in the pocket of Putin. Republican Patriots: Where are you???” The summit caps a trip abroad during which Trump accused NATO allies of failing to spend enough on their militaries and embarrassed British Prime Minister Theresa May by saying she refused to take his advice about how to negotiate Britain’s exit from the EU. He referred to the European Union itself as a “foe” in trade and repeatedly criticised it. In some of the strongest words yet reflecting the unease of Washington’s traditional allies, Germany’s foreign minister said on Monday Europe could no longer rely on the United States. “To maintain our partnership with the USA we must readjust it,” Heiko Maas told the Funke newspaper group. “The first clear consequence can only be that we need to align ourselves even more closely in Europe.”