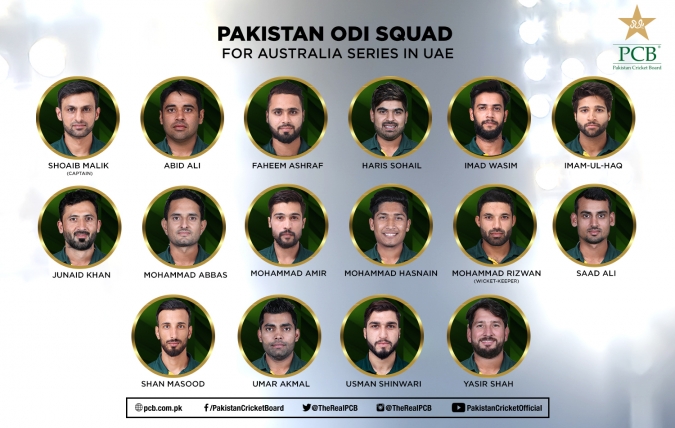 KARACHI (92 News) – The Pakistan cricket selectors have named a 16-member squad for the five-match ODI series against world champions Australia and Sarfraz Ahmad rested, Shoaib Malik will lead the team According to the press release by PCB, The series will start in Sharjah on 22 March and culminate in Dubai on 31 March. The selectors have rested six players from the squad that lost 2-3 to South Africa earlier this year. They are: Captain Sarfaraz Ahmed, Babar Azam, Fakhar Zaman, Hasan Ali, Shadab Khan and Shaheen Shah Afridi, while Hussain Talat has been dropped and Mohammad Hafeez was not considered as he is recovering from a thumb surgery. Shoaib Malik has been appointed the captain in Sarfaraz’s absence. The 37-year-old has played 279 ODIs, including 38 as captain, winning 25 and losing 13. Shoaib has scored 7,379 runs with nine centuries and taken 156 wickets. The eight players have been replaced by cricketers who have either demonstrated in the domestic circuit that they have the ability and are ready to compete at the top level or have reclaimed fitness or form. These include Abid Ali, Haris Sohail, Junaid Khan, Mohammad Abbas, Mohammad Hasnain, Saad Ali, Umar Akmal and Yasir Shah. https://www.youtube.com/watch?v=1v5FYPqFWCs Of these eight players, there are four uncapped players in Abid Ali, Mohammad Abbas, Mohammad Hasnain and Saad Ali. The squad includes three openers (Abid Ali, Imam-ul-Haq, Shan Masood), four middle-order batsmen (Haris Sohail, Saad Ali, Shoaib Malik, Umar Akmal), wicketkeeper Mohammad Rizwan, wrist spinner Yasir Shah, two all-rounders (Faheem Ashraf and Imad Wasim) and five fast bowlers (Junaid Khan, Mohammad Amir, Mohammad Abbas, Mohammad Hasnain and Usman Shinwari). Pakistan chairman of selectors Inzamamul Haq: “I am pleased that we have been able to develop a strong bench-strength that has helped us to make eight changes from the previous series. This is a good sign for Pakistan cricket as we now have a big pool of players who have the capability, talent and potential, and are raring to step up and seize the opportunity when thrown at the deep end. “The changes have been made taking into consideration the player workload in the build up to the World Cup, which starts 30 May. Apart from five ODIs against Australia, we have three warm-up games followed by five ODIs against England, and then two World Cup warm-up matches followed by, at least, nine games, which Inshallah will become 11 matches. “This is too much cricket in a short period of time. Had there been no pre-World Cup matches in England, then we would not have made these many changes. “While Haris Sohail, Junaid Khan, Umar Akmal and Yasir Shah are returning to ODI cricket, Abid Ali, Mohammad Abbas, Mohammad Hasnain and Saad Ali have been rewarded for stellar performances in domestic cricket. “The series against the world champions will not be an easy one and these players, in fact, will be tested to their limits. This will provide these players a great opportunity to display their skills and temperament, strengthening their claims for a World Cup call-up as there are a few places up for grabs. “Abid Ali has been knocking on the doors of international cricket. But because we had opted for tried and tested players in the past few series, he was unable to break into the side. He has now got an opportunity and I am hoping he will deliver the goods. “Mohammad Abbas, we think, will be a handy and wicket-taking bowler in English conditions as he has regularly made the new ball do the talking. We were unable to try him in South Africa due to his shoulder injury, so this is his chance to show that he can be as effective and lethal with the new ball in ODI cricket as he is in the longer format. “Mohammad Hasnain has been identified as one of the fast bowlers for the future. The 18-year-old has not only bowled with pace, regularly clocking 145kmp/h, he has shown tremendous control with the ball which has earned him crucial wickets in the ongoing HBL PSL. Like we nurtured and trained Shaheen Shah Afridi and so many other great fast bowlers of yester years, we, with the support of the team management, have decided to provide the same pathway to the Hyderabad-born lad. “Umar Akmal, we all know, is immensely talented and still has plenty to offer. Sometimes, time away from international cricket allows a player to recompose and gather himself, and come back strongly. I hope this happens with this player, as a fully fit and in-form Umar will bolster the middle-order. “Saad Ali has not only been a consistent scorer in domestic cricket, including 50-over cricket, but also had good series against England and New Zealand A sides. “Haris Sohail and Junaid Khan have been drafted in the side after they have regained complete match fitness, while Yasir Shah has been included in the side keeping in mind that we may opt to select two wrist spinners in the World Cup squad.” The Pakistan cricket team will depart for the UAE on 18 March. Squad: Shoaib Malik (captain), Abid Ali, Faheem Ashraf, Haris Sohail, Imad Wasim, Imamul Haq, Junaid Khan, Mohammad Abbas, Mohammad Amir, Mohammad Hasnain, Mohammad Rizwan (wicketkeeper), Saad Ali, Shan Masood, Umar Akmal, Usman Shinwari, Yasir Shah Series schedule: 22 March – 1st ODI, Sharjah (d/n) 24 March – 2nd ODI, Sharjah (d/n) 27 March – 3rd ODI, Abu Dhabi (d/n) 29 March – 4th ODI, Dubai (d/n) 31 March – 5th ODI, Dubai (d/n)