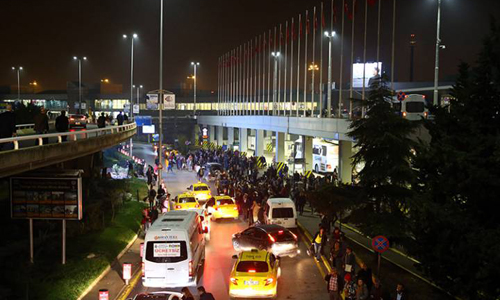 ISTANBUL- Turkish authorities briefly barred cars from entering and leaving Istanbul's main Ataturk Airport on Sunday after police fired shots when a motorcycle refused an order to stop, CNN Turk said. One of two men aboard the motorcycle was wounded and detained and the second was apprehended by police after a pursuit, the private broadcaster reported. No police or civilians were reported hurt. In June, suicide bombers suspected of belonging to Islamic State killed 41 people and wounded some 240 others with gunfire and explosives at the airport. The latest incident did not affect flights at Ataturk, Europe's third-busiest airport, the channel reported. Ataturk is the hub of state-run carrier Turkish Airlines. It was not immediately clear why the police ordered the men to stop. On Friday, a car bomb detonated in the mainly Kurdish city of Diyarbakir, killing 11 people and wounding at least 100. Officials blamed the autonomy-seeking Kurdistan Workers Party (PKK), although Islamic State claimed responsibility for the attack, according to the group's Amaq news agency. Kurdish militants, Islamic State radicals and far leftists have all staged attacks on civilians in Turkey in recent years. -Reuters