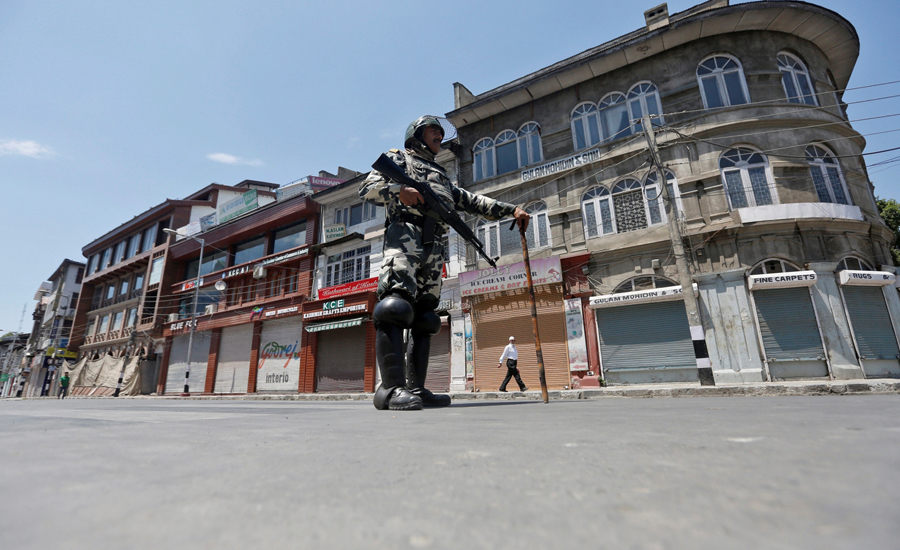 SRINAGAR (92 News) – A shutdown has continued on Tuesday across Indian-occupied Kashmir (IoK), following deadly clashes that resulted in 19 deaths. Indian armed police and paramilitary soldiers in riot gear fanned out across the region and patrolled streets in anticipation of anti-India protests and clashes. The puppet authorities also imposed a curfew in some towns in southern Kashmir and in the old parts of the disputed region’s main city of Srinagar, the urban center of protests and clashes against Indian rule. Shops and businesses closed in other areas where no security restrictions were in place. Separatist leaders who challenge India’s sovereignty over Kashmir called for a shutdown on Monday to protest the killings. Authorities shut schools and colleges and cancelled university exams in an attempt to stop protests by students. Despite the suspension of classes, anti-India protests erupted at the University of Kashmir, where many students gathered in the main campus in Srinagar and shouted slogans such as “Go India, go back” and demanded an end of Indian rule over the region. Officials also halted train services and cut cellphone internet access in the most restive towns, and reduced connection speeds in other parts of the Kashmir Valley, a common government practice aimed at calming tensions and preventing anti-India demonstrations from being organized. Troops laid steel barricades and razor wire on roads and intersections to cut off neighborhoods as authorities anticipated widespread protests. On Sunday, 19 people, including Indian soldiers, were martyred in three villages of south Kashmir's Shopian district and one youth was martyred in Dialgam, a village in Anantnag district. The killings led to massive demonstrations in many parts of the region, in which more than three dozen people were wounded. On the other hand, the International Commission for Human Rights (ICHR) Chairman and the Permanent Representative to the International Human Rights Association of American Minorities to the UN in Geneva, Barrister Abdul Majeed Tramboo, has urged the Secretary General of Organization of Islamic Cooperation (OIC), Dr Yousef Ahmad Al-Othaimeen, and the President of European Parliament, Antonio Tajani, to condemn the Bloody Sunday massacre in occupied Kashmir and prevail upon the Indian government to stop gross human rights violations in the territory to the immediate effect. Barrister Abdul Majeed Tramboo in a letter to the OIC Secretary General and the EU President said that the Kashmiri protestors were met with mighty military power including pellet guns that killed several youth and injured more than 200. Meanwhile, UN Secretary-General Antonio Guterres also voiced serious concern over the spate of killings of Kashmiri protesters in Indian occupied Kashmir and called for an investigation. He said it is basic principle to investigate escalating violence and protect civilians wherever they are, whether it is in Gaza, Jammu and Kashmir, or Yemen.