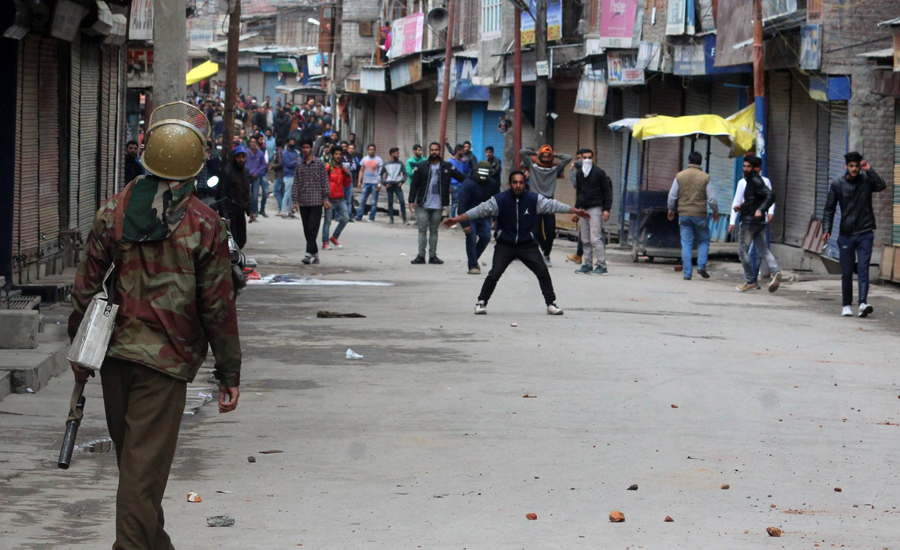 SRINAGAR (KMS) – In Occupied Kashmir, a complete shutdown will be observed to mark the sixth martyrdom anniversary of Kashmiri leader Muhammad Afzal Guru on Saturday. The call for the shutdown has been given by the Joint Resistance Leadership comprising Syed Ali Gilani, Mirwaiz Umar Farooq and Muhammad Yasin Malik. The JRL has also called for the shutdown in the territory and a march towards Lal Chowk in Srinagar on Monday to press the demand for the return of the mortal remains of Muhammad Afzal Guru and renowned Kashmiri liberation leader, Muhammad Maqbool Butt, from New Delhi’s Tihar Jail to occupied Kashmir for decent burial. India had hanged Muhammad Afzal Guru in New Delhi’s Tihar Jail on February 9, 2013 and Muhammad Maqbool Butt in the same jail on February 11, 1984, for their role in the Kashmir freedom movement. Their bodies remain buried on the premises of the jail. The occupation authorities have put Hurriyat leader, Hilal Ahmed War, under house arrest in Srinagar while Muhammad Yasin Malik is already under detention. The action is aimed at preventing the leaders from leading demonstrations against India on the anniversaries of Muhammad Afzal Guru and Muhammad Maqbool Butt. Hurriyat leaders and organizations, including Syed Ali Gilani, Mirwaiz Umar Farooq, Muhammad Ashraf Sehrai, Muhammad Yasin Malik, Shabbir Ahmed Dar, Bilal Siddiqi, Farida Bahenji, Zafar Akbar Butt, Abdul Samad Inqilabi, Barrister Abdul Majeed Tramboo, Democratic Freedom Party and Muslim League in their statements paid glowing tributes to Muhammad Afzal Guru and Muhammad Maqbool Butt on the eve of their martyrdom anniversaries. They said that the Kashmiri people would not allow the sacrifices of their martyrs go waste and would accomplish their mission at all costs. Hurriyat leader, Imtiaz Ahmed Reshi, continued the signature campaign in Srinagar for seeking the transfer of the mortal remains of the two martyred leaders from Tihar Jail to Occupied Kashmir. The Chairman of Hurriyat Forum, Mirwaiz Umar Farooq, addressing a gathering at Jamia Masjid in Srinagar, expressed anguish over total apathy and callousness of the authorities towards the people of Occupied Kashmir, struggling with the fallout of adverse weather conditions for the last two months without any respite. He said that the authorities had done nothing to ameliorate the difficulties and sufferings of the masses but were only engaged in cordon and search operations meant to kill, maim, terrorize and destroy people. In the meantime, Indian troops launched a cordon and search operation in Gamroo area of in Bandipora district on Friday. The New York-based media watchdog, Committee to Protect Journalists, in a statement urged the police in Occupied Kashmir to immediately cease all legal proceedings against journalist, Aasif Sultan, and release him. It said that filing of terrorism-related charges against Aasif Sultan, despite a complete lack of evidence, marks a terrible injustice and further undermines press freedom in Occupied Kashmir.