Siemens is well placed to adapt business in U.S. - CEO 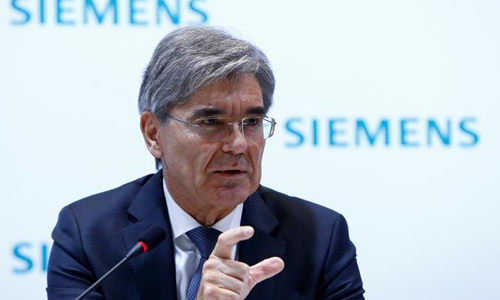 Siemens is well placed to adapt business in U.S. - CEO

BERLIN - German trains-to-turbines group Siemens is well placed to do business in the United States, regardless of whether President-elect Donald Trump backs fossil-fuels at the expense of renewable energy, its CEO told a newspaper. "The good thing is that we can offer everything. Steam power plants that are powered by coal, state-of-the-art gas-fired power plants, wind energy, we can build solar parks and the necessary link to the power grid," Joe Kaeser told Frankfurter Allgemeine Zeitung (FAZ) in an interview. Siemens employs 50,000 people and makes $22 billion in revenues in the United States, its single biggest market, accounting for a quarter of its total sales. "It should pay off that Siemens has built up local production and engineering in the United States a long time ago." Global renewable stocks fell following Trump's election victory, fuelling concerns about the long-term prospects of the industry in the United States. Siemens earlier this month said it planned a public listing of its $15 billion healthcare business, its most profitable, and Kaeser told FAZ that there was not much work left to do to make the unit ready for a stock exchange flotation. "We have a lot of practice," Kaeser said, pointing to lighting group Osram, which was spun off by Siemens in 2013 and in which it still holds a 17 percent stake. Chinese chipmaker Sanan Optoelectronics last month confirmed it had been in "preliminary contact" with Osram after reports that it was interested in buying the lighting group lifted the German firm's shares. Asked whether selling its stake to a Chinese suitor was an issue for Siemens, Kaeser said: "China is the world's largest lighting market. That should not be ignored lightly." -Reuters