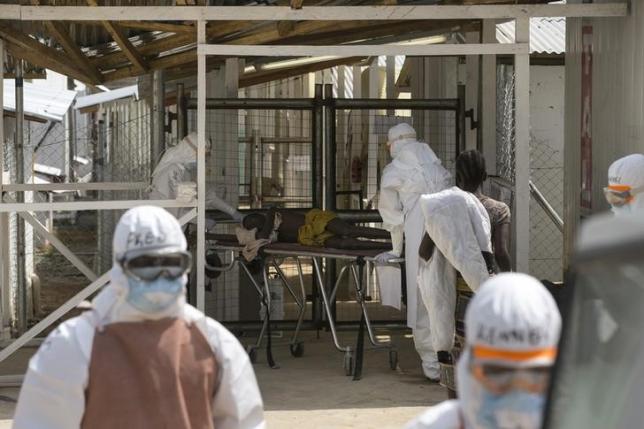 FREETOWN - Sierra Leone's President Ernest Bai Koroma said on Wednesday authorities would soon start laying off staff recruited to fight Ebola as the numbers of cases decline, but these workers would be employed elsewhere, where possible. Sierra Leone and neighboring Liberia and Sierra Leone are battling to stamp out the worst Ebola outbreak on record, which has killed over 10,000 people during the last year. Addressing the country about the outbreak, Koroma said the infection rate was falling "week by week" and the number of treatment facilities and staff would be reduced, despite the need for continued vigilance. "For those who will be laid off because of the scaling down of facilities, let me express my sincere thanks to you for your brave national service to your country," he said. No details were given on how many people would be laid off. At the peak of the crisis last year, authorities were struggling to recruit local and foreign medics to tackle Ebola, which has killed nearly 500 local health workers in West Africa, according to United Nations statistics. Sierra Leone began paying staff $100 per week hazard pay but Koroma said that has been ended. "Because you have all done a good job, because you have also gained valuable knowledge and skills that are forever now required in this country, the government is working toward providing employment and absorbing some of you into the service as soon as possible," he said. Schools that were closed in July last year are due to re-open on April 14th and tuition fees will be waived in public schools for the next two years, he said. The leaders of Liberia, Sierra Leone and Guinea have set April 16 as a target for no new cases. Despite an overall trend showing the disease is coming under control, U.N. figures released on Wednesday showed a total of 82 new cases in the region during the week to March 29. Guinea, which appears to be the worst affected at this time, saw an increase in the number of areas recording Ebola, with seven prefectures reporting at last one confirmed case. Guinea has declared a 45-day state of health emergency in the prefectures of Forecariah, Coyah, Dubreka, Boffa, and Kindia. - Reuters