PUNE (92 News) – New Delhi-based Sikh activists helped 32 Kashmiri girls studying in Pune reach their home in Kashmir post abrogation of Article 370 in the area. On the one hand, after the abrogation of Article 370 from Indian Occupied Kashmir (IoK), BJP leader made obscene statement about Kashmiri girls; on the other hand, the Sikh community has set a precedent of humanity by helping the Kashmiri girls. Video of Sikh activists facilitating the return of 32 Kashmiri girls has gone viral. They also arranged air tickets for their travel. “We want to go back to our homes,” was the panicky call that software engineer Harminder Singh Ahluwalia received a week ago. On the other side of the phone were 32 Kashmiri girls, terrified as he recalls it, and panicking visibly after the government moves in Kashmir. And even more so after a Chief Ministers comments about the availability of Kashmiri girls. 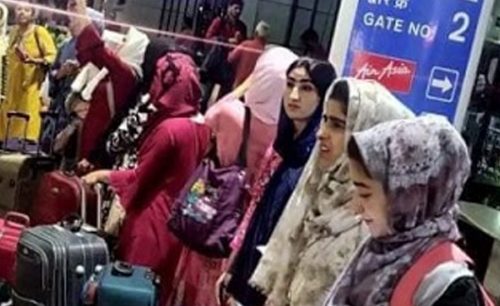 Ahluwalia became the contact person as out of sheer humanity he posted a video urging all Kashmiris who felt unsafe in any part of India to call him, or go to the nearest gurudwara. The video went viral, generated huge response, and one was this phone call from the young girls who did not know what to do, where to go. They were all in Patna, having reached there just about five days before as part of a Skill India program for training in nursing. Ahluwalia sent out another appeal to the Sangath for donations to buy their tickets and got immediate help from a Sikh businessman who said he should immediately purchase the tickets, and return the money when the donations trickled in. He went ahead and did just that. The girls were escorted to Srinagar. The families had not been in touch for two weeks then, and the relief was palpable. It is pertinent to mention here that the girls have come to Pune for nursing training under Skill India Programme. “So I went on Facebook live and these girls saw and approached me for help, they were very afraid and wanted to go back home. We raised funds for these 32 girls in Pune through Facebook and arranged tickets for them to Srinagar from Pune and Mumbai. After reaching Srinagar we handed over the girls to their family members,” United Sikh Mission President Harminder Singh Ahluwalia said.