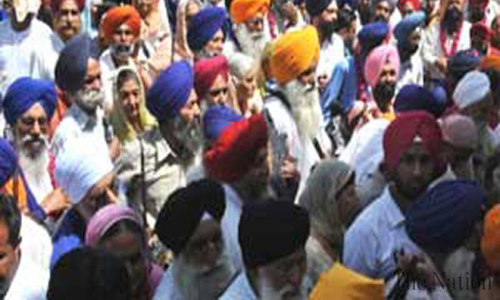 LAHORE (92 News) – A group of Sikh yatrees reached Pakistan by train to participate in the Baisakhi Mela starting in Nankana Sahib from April 14. Yatrees group leader Sardar Suran Singh Gill said that arrangements to facilitate yatrees are being improved day by day and as a result, the number of yatrees is increasing. “We are thankful to the Pakistan government for making the best arrangements and protecting their religious places,” he said. Yatrees said: “We feel as if we are in our country due to love we received in Pakistan.” After participating in the Baisakhi Mela in Nankana Sahib, the yatrees will perform their rites at their religious places in Sacha Soda, Hassan Abdal and Panja Sahib. Evacuee Trust Property Board (ETPB) chairman Siddiqul Farooq welcomed the yatrees. Speaking on the occasion, Siddiqul Farooq said that they had tried to make better arrangements as compared to the previous year.