NEW YORK (92 News) – The Sikhs and Kashmiris protested against Indian government’s state sponsored terrorism as Indian Minister for External Affairs Sushma Swaraj addresses United Nations General Assembly (UNGA) in New York. During the speech of Swaraj in the UNGA session, the protestors demonstrated outside the UNGA and raised slogans against Indian government. The Kashmiri and Sikh community – who are residential of America – gathered outside the UNGA for support against the Indian extremism in Indian-held Jammu Kashmir (IHK). However, outside the UN building protesters comprising of Sikhs and Kashmiris raised slogans against the Indian government and said that India’s state sponsored terrorism should be put into light in the world forum. – UN chief voiced concern over prevailing HR situation in IHK – 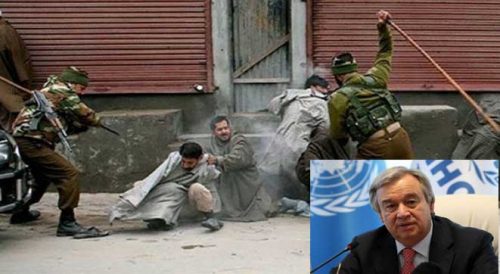 The United Nations Secretary General, Antonio Guterres has voiced concern over the prevailing human rights situation in occupied Kashmir. In an interview with an Indian news agency, he said, “I remain concerned by the situation in Jammu and Kashmir and I encourage positive dialogue to resolve this issue peacefully.” The UN chief will be in India for the next three days to meet President Ram Nath Kovind, Prime Minister Narendra Modi and Foreign Minister Sushma Swaraj.