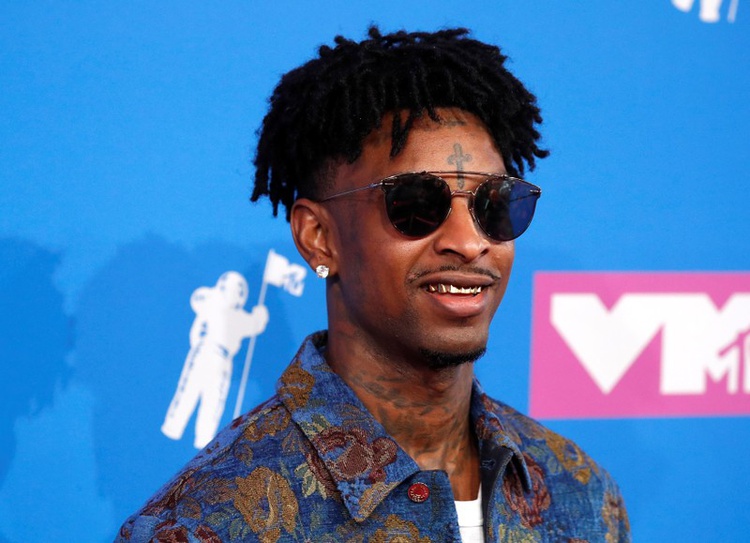 LOS ANGELES (Reuters) - UK-born rapper 21 Savage, who faces possible deportation from the United States, was largely unmentioned at the Grammys on Sunday, although his supporters on social media criticized stars for their silence.
21 Savage was arrested by US Immigration and Customs Enforcement (ICE) agents a week ago in Atlanta, where he grew up, and remains in detention. He was nominated for two Grammy Awards for his work as a featured artist on Post Malone’s song “Rockstar.” Swedish composer Ludwig Goransson included the rapper among those he acknowledged. He said in an acceptance speech for his contribution to Childish Gambino’s Grammy-winning record “This Is America” that 21 Savage “should be here tonight.” Post Malone was photographed backstage with a T-shirt that had 21 Savage’s name on it, which he wore under an embroidered jacket before taking the stage to play guitar and sing with rock group Red Hot Chili Peppers. Many social media users criticized Post Malone for not speaking out about 21 Savage during his performance. Post Malone did not win a Grammy Award on Sunday. “Big missed opportunity for @PostMalone to advocate for @21savage’s release from #ICE during his performance of ‘Rockstar,’ which features 21,” the civil rights group Color of Change wrote on Twitter. Twitter user Venus Sisi Eko wrote: “The only person to shout out 21 Savage all night was a white boy from Sweden. No. One. Else. Not even Post Malone, with whom he shares a Grammy-nominated song. SHAMEFUL.” More than 435,000 people signed an online petition created by Patrisse Cullors, one of the founders of the Black Lives Matter movement, calling for 21 Savage to be allowed to stay in the United States. The 26-year-old entertainer, whose real name is Sha Yaa Bin Abraham-Joseph, was arrested over accusations that he had overstayed his visa after he came to the United States from Britain in 2005, officials said. 21 Savage’s attorneys have disputed the grounds for his arrest and detention, which has caused an uproar in the US hip-hop community. He first came to the United States at age 7, his attorneys said in a statement last week, and has been in the United States for most of his life.

On Feb 5, attorneys for rapper 21 Savage, who was taken into custody in Atlanta on immigration charges over the weekend, said on Monday that he had been arrested based on incorrect information about his criminal record and should be released while awaiting court proceedings.
The entertainer, whose real name is Sha Yaa Bin Abraham-Joseph, was arrested on Sunday by US Immigration and Customs Enforcement agents over accusations that he had overstayed his visa by more than a decade. He came to the United States from Britain in 2005, officials said.