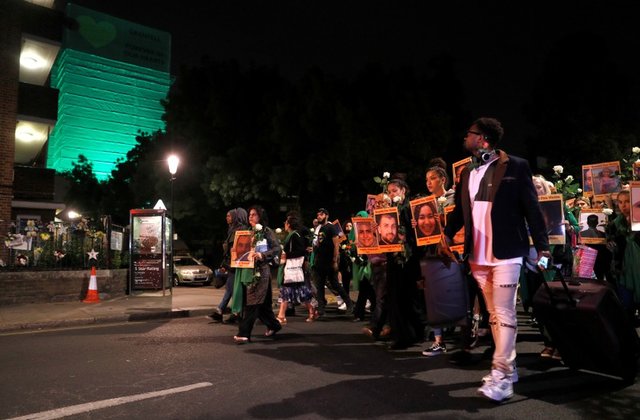 LONDON (Reuters) - A round-the-clock vigil at a London church where people sought refuge on the night of the Grenfell Tower fire, which killed 71 people, will mark the first anniversary of a tragedy that still haunts Britain. Grenfell Tower, a social housing block that was home to a close-knit, ethnically diverse community, was engulfed by flames in the middle of the night of June 14, 2017, in Britain’s deadliest domestic fire since World War Two. The disaster, which unfolded within one of London’s richest boroughs, prompted a national outpouring of anguish over social inequalities, poor quality social housing and neglect of immigrant communities. At St Clement’s, a church where people fleeing the burning building gathered that night and local residents came to offer their support, an all-night, silent vigil began at 6 p.m. yesterday. The silence will be broken only when the names of all the victims are aloud at 1:30 a.m. - the time when the deadly blaze engulfed the tower a year earlier - and when prayers are said on the hour through the night. In the run-up to the anniversary, the top floors of the charred ruins of the building have been covered with white sheeting displaying large green hearts - the symbol of the tragedy - and the words “Grenfell Forever In Our Hearts”. Buildings across Britain, including Prime Minister Theresa May’s official residence Number 10 Downing Street, will be lit up in green overnight in honour of the victims. A national minute’s silence will take place at 12 p.m. on Thursday, with survivors and bereaved people expected to gather close to the charred tower. Commemorations will also include a silent march on Thursday evening, and several religious services at churches and mosques. A public inquiry into the causes of the fire is not sitting in the anniversary week, out of respect for the victims and survivors. The blaze is also the subject of a police inquiry which could result in criminal charges related to negligence and breaches of health and safety regulations.