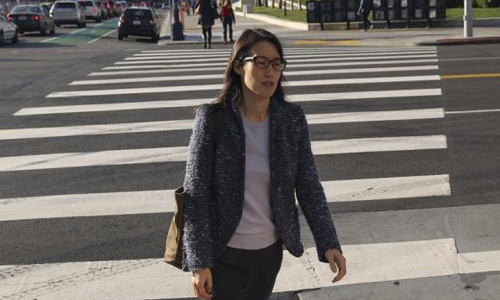 SAN FRANCISCO - Dollar signs rather than discrimination drove a former partner at venture-capital firm Kleiner Perkins Caufield & Byers to file her gender discrimination suit, a lawyer for the firm told jurors Tuesday in the high-profile trial. "The complaints of Ellen Pao were made for only one purpose,” said Lynne Hermle, a lawyer for Kleiner Perkins, in her closing arguments in San Francisco Superior Court. “A huge payout for Team Ellen." But Pao’s lawyer, Alan Exelrod, told a different version of events in the case, which has become a cultural touchstone in Silicon Valley and beyond. "They ran Kleiner Perkins like a boys' club," Exelrod said of firm leaders, whom he blamed for creating an environment that worked against women. Originally filed in 2012, the lawsuit has unfolded as the technology industry tries to come to grips with its low numbers of women, especially at senior levels. Increasingly, technology companies are debating how much their culture, rather than the paucity of women trained in science and technology, is to blame. Jurors are being asked to decide whether Kleiner discriminated against Pao and failed to prevent discrimination against her based on gender, and whether it retaliated against her by not promoting her and subsequently firing her. The case has laid bare the personnel matters of the firm that backed Google and Amazon, painting it as a quarrelsome pressure cooker where a former male partner used business trips as opportunities to make advances to female colleagues. Evidence that will factor into jurors' decision ranges from whether women were maliciously excluded from events such as an all-male dinner hosted by Vice President Al Gore, a Kleiner partner, to the criteria used in promotions. Pao’s lawyers say that characteristics that helped men, such as competitiveness, hurt female partners, whereas Kleiner’s lawyers say all partners were judged equally on merit. While Pao’s lawyers say some women were promoted rapidly only after Pao started complaining, Kleiner’s lawyers say the firm decided on the promotions months earlier. Pao, now interim chief executive at social-news service Reddit, claims her standing at Kleiner crumbled after she ended a brief affair with partner Ajit Nazre. Her career deteriorated after he and Kleiner started retaliating against her, her lawyers argue. Pao sought to illustrate her points with testimony from former Kleiner partner, Trae Vassallo, who said Nazre appeared at her hotel room late at night on a business trip. He wore a bathrobe and carried a glass of wine, according to testimony. Kleiner has vigorously disputed Pao’s allegations, arguing that it investigated Nazre following Vassallo's complaint, after which he quickly left the firm. Some witnesses, including Pao's one-time mentor John Doerr, have testified that Pao's lack of advancement stemmed from subpar performance, not discrimination or retaliation. Pao’s attorneys countered that she laid the groundwork for the firm’s highly successful investment in RPX, the patent company, as well as suggesting an early investment in Twitter, an idea more senior partners rejected at that time. In court on Tuesday, Exelrod called Pao "a hardworking, incredibly thoughtful productive employee" who generated more revenue than any of the men who were promoted in 2012. "Ellen Pao drove the returns. The men received the promotions," Exelrod said. Later, Hermle played down Pao’s contributions at RPX and elsewhere. “She was not a fit for the team-based culture that is at the heart of venture capital,” Hermle said. Jurors are expected to begin deliberating following the end of closing arguments, which are scheduled to continue on Wednesday. - REUTERS