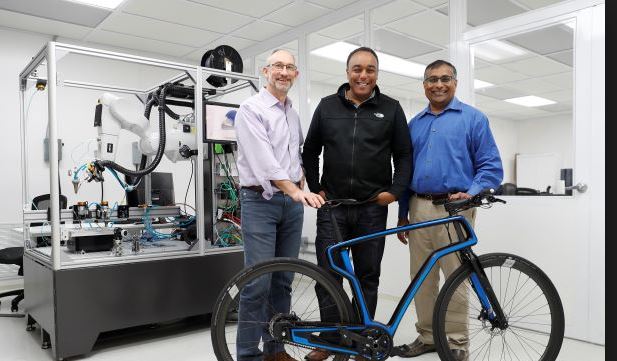 CALIFORNIA (Reuters) - After a career that included helping Alphabet Inc’s Google build out data centres and speeding packages for Amazon.com Inc  to customers, Jim Miller is doing what many Silicon Valley executives do after stints at big companies: finding more time to ride his bike. But this bike is a little different. Arevo Inc, a startup with backing from the venture capital arm of the Central Intelligence Agency and where Miller recently took the helm, has produced what it says is the world’s first carbon fibre bicycle with 3D-printed frame. Arevo is using the bike to demonstrate its design software and printing technology, which it hopes to use to produce parts for bicycles, aircraft, space vehicles and other applications where designers prize the strength and lightness of so-called “composite” carbon fibre parts but are put off by the high-cost and labour-intensive process of making them. Arevo raised $12.5 million (£9.2 million) in venture funding from a unit of Japan’s Asahi Glass Co Ltd , Sumitomo Corp’s Sumitomo Corp of the Americas and Leslie Ventures. Previously, the company raised $7 million from Khosla Ventures, which also took part in  funding , and an undisclosed sum from In-Q-Tel, the venture capital fund backed by the CIA. Traditional carbon fibre bikes are expensive because workers lay individual layers of carbon fibre impregnated with resin around a mould of the frame by hand. The frame then gets baked in an oven to melt the resin and bind the carbon fibre sheets together. Arevo’s technology uses a “deposition head” mounted on a robotic arm to print out the three-dimensional shape of the bicycle frame. The head lays down strands of carbon fibre and melts a thermoplastic material to bind the strands, all in one step.
The process involves almost no human labour, allowing Arevo to build bicycle frames for $300 in costs, even in pricey Silicon Valley. “We’re right in line with what it costs to build a bicycle frame in Asia,” Miller said. “Because the labour costs are so much lower, we can re-shore the manufacturing of composites.” While Miller said Arevo is in talks with several bike manufacturers, the company eventually hopes to supply aerospace parts. Arevo’s printing head could run along rails to print larger parts and would avoid the need to build huge ovens to bake them in. “We can print as big as you want - the fuselage of an aircraft, the wing of an aircraft,” Miller said.