KARACHI (92 News) – Sindh Chief Minister (CM) Syed Murad Ali Shah on Sunday chaired a high-level meeting to review law and order situation including security plan for Muharramul Haram in the province. During the meeting, overall security situations in the province, kidnapping and ransom incidents in kacha areas, street crimes, security plan for Muharramul Haram especially Ashura and other issues discussed. The chief secretary, the Rangers DG and the Sindh Inspector-General of Police (IGP) attended the meeting. Sindh IGP Dr Kaleem Imam briefed the meeting about law and order situation of the province. “Snap checking during Muharramul Haram will be increased and as many as 71,485 personnel in the province and 10,672 will be deployed especially in Karachi to protect the processions and Majalis,” he said. The IG said 52 companies of army 7,700 Rangers personnel and 10 companies of FC have been requested to get ready. Addressing the meeting, the provincial chief executive said that to enforce law and order in the province is the top priority of the provincial government. The Muharram-ul-Haram moon has been sighted across the country, it was announced by Central Ruet-e-Hilal Committee Chairman Mufti Muneebur Rehman after a meeting on Saturday. 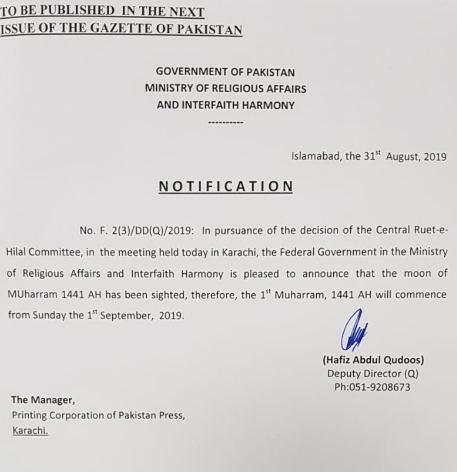 Mufti Muneebur Rehman announced that Muharram, the first month of the Islamic (Hijri) calendar will begin from Sunday, September 1, 2019 and the day of Ashura will fall on Tuesday, September 10. Zonal Committees also held their meetings in major cities to collect evidences of moon sighting. They sent the evidences to the Central Ruet-e-Hilal Committee which made the final decision. The Hijri year of 1441 has begun with the sighting of the moon of Muharram-ul-Haram. The day of Ashura is marked by Muslims to commemorate the martyrdom of Hazrat Imam Hussain (RA) and his companions on 10th of Muharram. The federal and provincial governments announce two public holidays on 9th and 10th Muharram.

Sindh CM extends closure of educational institutions by a week

ISLAMABAD (92 News) – Interior Minister Sheikh Rasheed has said that the Afghan diplomat's daughter was not kidnapped and it allegation was part of the media war.

LAHORE (92 News) - Punjab Chief Minister (CM) Usman Buzdar has said a foolproof security plan has been devised for Muharram-ul-Haram to ensure peace and harmony in the province.

ISLAMABAD (92 News) – The federal government has decided to end the 'Daku Raj', a dacoit rule, in Sindh.

ISLAMABAD (92 News) – Prime Minister Imran Khan said that the PTI government has been trying to make the powerful subservient to the law for the last three years.