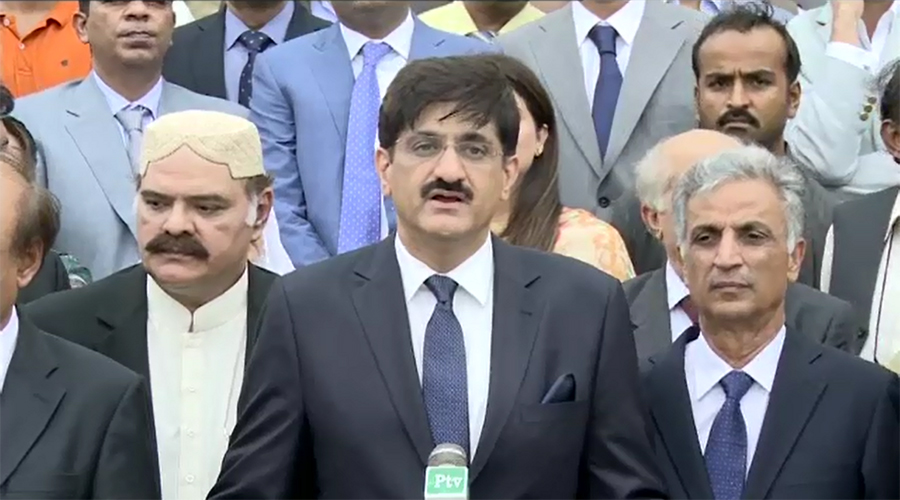 KARACHI (92 News) – Sindh Chief Minister Murad Ali Shah has assured extension in the powers of the Rangers. Talking to the media after swearing in the new cabinet at Mazar-e-Quaid on Saturday, he said that there would be no compromise on peace in Karachi. “I am not like Shahbaz Sharif,” he added. The chief minister said that the culprits of an attack on the Rangers in Larkana would be brought to justice. He said that Sial had been inducted in the cabinet for his best performance. Meanwhile, Makhdoom Jamil (Revenue & Relief), Nisar Khoro (Food & Parliamentary Affairs), Sohail Sial (Agriculture), Jam Khan Shoro (Local Bodies) and Makesh Chawala (Excise), Shamim Mumtaz (Social Welfare), Mehtab Dhar, Sikandar Maindhru (Health) and Sardar Ali Shah (Culture) took the oath as the provincial ministers. The advisers and special assistants include Saeed Ghani, Murtaza Wahab, Maula Bakhsh, Asghar Junejo, Khato Mal, Irum Khalid, Sikandar Shoro and Ghulam Ali Shah are also part of the cabinet.