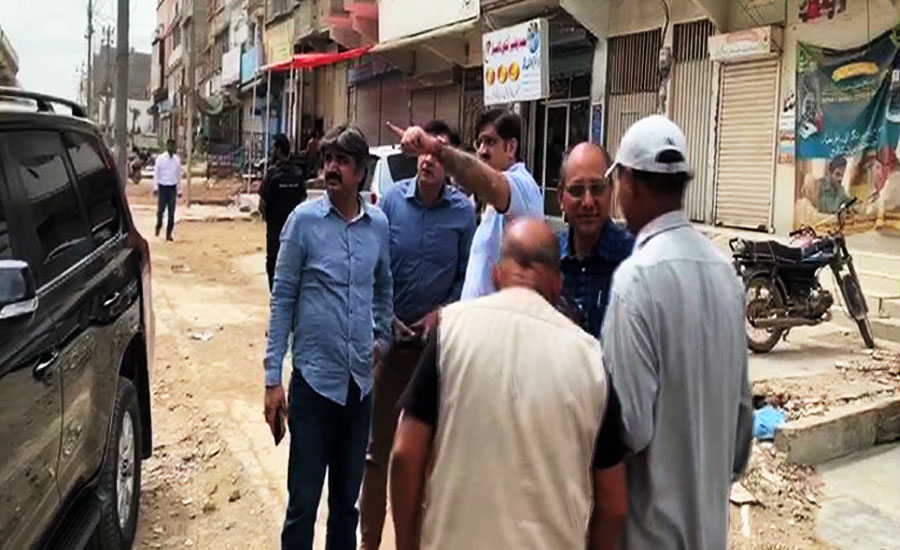 KARACHI (92 News) – Sindh Chief Minister (CM) Murad Ali Shah on Sunday has paid surprise visit to different areas on weekly off day in Karachi. The provincial chief minister visited Lesbela, Garden, North Karachi, Nagan Chowrangi and Orangi and reviewed the matter s related cleaning of the areas. He sought explanation from the local government after seeing heap of garbage alongside the nullah at Nasir Jump Road. He also reviewed the precautionary arrangements of administrations regarding rain with concerned officials. The chief minister examined the under construction work of Yellow Train and also checked construction of underpass on the Shaheed-e-Millat Road. Murad ali Shah expressed anger over delay in the completion of construction work of Yellow Line. He directed to complete developmental works immediately. He also expressed anger over defected drainage system on the road from Nazimabad to Liaquatabad which disturbed the traffic. He ordered to central deputy commissioner for clearing the route and removing hurdles on the road. “The criticizer should focus on our work. The rains can create problems but the administrations would be active for avoiding any untoward situation,” the Sindh chief minister while talking to the journalists. https://www.youtube.com/watch?v=LW72vAJScDI Earlier, Sindh Chief Minister Syed Murad Ali Shah, who also hodls the portfolio of the finance minister, presented the Rs1.218 trillion tax budget for the FY2019-20 amid rumpus by the opposition. Unveiling the budget, he announced a 15pc increase in the pensions and salaries of the government employees in addition to making new recruitment. According to the budget documents, the revenue targets have been revised from Rs 243.082 billion to Rs240.746 billion. As a result, against an estimated budgetary amount of Rs1.123 trillion rupees, the revised receipts for the current financial year stand at Rs963.699 billion. The total receipts of the province for the financial year 2019-20 are estimated at Rs1.217 trillion. As federal transfers, the province is expected to receive Rs835.375 billion. Receipts from the federal government will account for 74.3 percent of the total receipts.