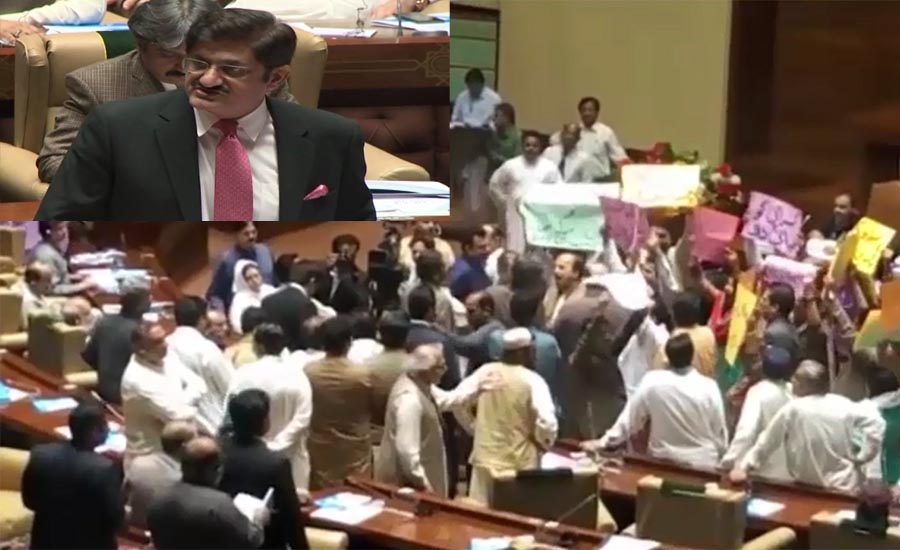 KARACHI (92 News) – Sindh Chief Minister Syed Murad Ali Shah, who also hodls the portfolio of the finance minister, presented the Rs1.218 trillion tax budget for the FY2019-20 amid rumpus by the opposition on Friday. Unveiling the budget, he announced a 15pc increase in the pensions and salaries of the government employees in addition to making new recruitment. According to the budget documents, the revenue targets have been revised from Rs 243.082 billion to Rs240.746 billion. As a result, against an estimated budgetary amount of Rs1.123 trillion rupees, the revised receipts for the current financial year stand at Rs963.699 billion. The total receipts of the province for the financial year 2019-20 are estimated at Rs1.217 trillion. As federal transfers, the province is expected to receive Rs835.375 billion. Receipts from the federal government will account for 74.3 percent of the total receipts. On the current revenue side, the expenditure budget is estimated at Rs870.217 billion which shows an increase of 12.5 per cent over the current year allocation of Rs773.237 billion. This increase in expenditure is primarily in the employee related expenses which could not have been avoided. Similarly, the impact of increasing utilities has been absorbed. According to the layout, an amount of Rs 283.5 billion has been earmarked for development projects which include Provincial and District Annual Development Programme. Presenting the budget in the House, Syed Murad Ali Shah said that allocation for school education has been increased from Rs170.832 billion to Rs178.618 billion in the next financial year, 2019-20, whereas, on development side, Rs15.15 billion have been allocated in ADP 2019-20. An amount of Rs13.50 billion has been earmarked for the health sector to bring improvement in it while Rs109.788 billion allocated in the head of law and order in the province. The chief minister announced Rs17,000 as minimum wages for workers.