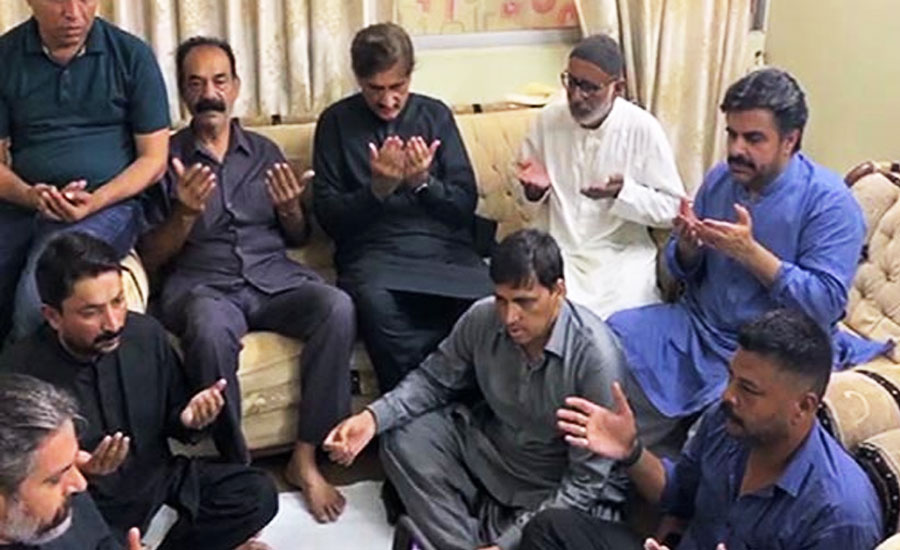 KARACHI (92 News) – Sindh Chief Minister Murad Ali Shah on Saturday visited the family of martyred Pakistan Army Major Adeel Shahid Zaidi and expressed condolences over the loss of their loved one in an IED blast. The chief minister, accompanied by members of his cabinet, including Saeed Ghani, Nasir Shah, Murtaza Wahab, reached the martyred army officer’s residence in Gulistan-e-Jauhar where he met with his children, including twins.

Murad Ali Shah also offered to extend assistance to the bereaved family. “I am ready to extend help to the family of the martyr,” he said, adding Major Adeel laid down his life for the sake of the motherland. On Saturday,  Major Adeel Shahid, who embraced martyrdom during fencing along Pak-Afghan Border in Mohmand District, was buried with full military honours in Karachi. Earlier, his funeral was held in Karachi. Sindh Chief Minister Syed Murad Ali Shah, Corps Commander Karachi Lieutenant General Humayun Aziz and large number of people from different walks of life attended his funeral. Major Adeel Shahid was martyred in an Improvised Explosive Device (IED) blast at Pak-Afghan border. According to the Inter-Service Public Relation (ISPR), a Pakistan Army Major and a Sepoy embraced martyrdom at Pak-Afghan border as a result of an Improvised Explosive Device (IED) blast planted by terrorists.