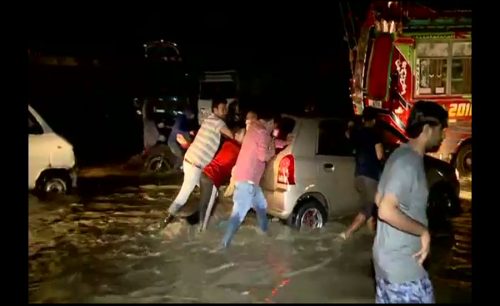 A tree was uprooted because of gusty winds and rain in Block 4 Gulistan-e-Johar. The session of Karachi Metropolitan Corporation (KMC) convened for Thursday has been postponed following rain spell that again lashed roads, streets, open places and drains. The rain water entered the houses and power outages again gripped parts of the provincial metropolis. The Met Office predicted rains may continue as of Thursday afternoon. All Sindh Private Schools Association has announced closure of schools on Thursday. Sindh Disaster Management Authority (SDMA) also issued alert after Met Office said Rain system coming from Rajihistan will strike parts of Sindh. All Commissioners and Deputy Commissioners have been issued written direction to take precautionary measures.