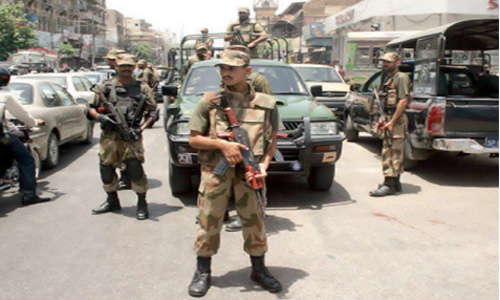 KARACHI (92 News) – Sindh Rangers have detained as many as 356 people for snatching sacrificial hides and confiscated more than 18000 hides during the Eidul Azha. In a statement issued by the Rangers, the spokesman said that the Rangers have carried out operations against snatching of hides across Sindh including Karachi and apprehended 356 people during which 18000 hides were seized. “Interrogation from 36 accused involved in heinous crimes is underway.” He said that Muttahida Qaumi Movement, Sunni Tehreek, Jamat-e-Islami, Ahl-e-Sunnatwal Jamaat, Jamaatud Dawa, Dawat-e-Islami and Memons were found guilty of violating the code of conduct. The Rangers has once again thanked the people for their cooperation and said that the detailed report will soon be sent to provincial and federal governments. On the other hand, police have nabbed a man from Liaqatabad Al-Azam Square and confiscated 500 sacrificial hides from his possession. Police said that the accused Zakir Ahmad was illegally collecting hides, adding that he didn’t have permit to buy or collecting hides.