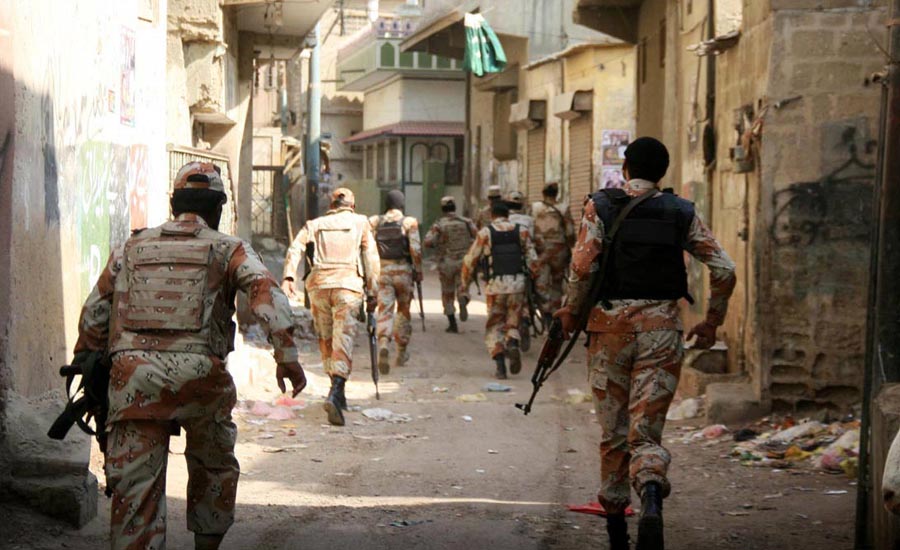 KARACHI (92 News) – The Sindh Rangers on Tuesday seized a huge cache of arms from a house situated at Azizabad area of Karachi on the information of two arrested members of the Muttahida Qaumi Movement- South Africa network. According to the Ranger’s spokesperson, the paramilitary agency personnel conducted a raid at a house in Azizabad, Federal B Area, pointed out by the two accused, and recovered large quantity of arms and munitions The spokesman informed that 195 rifle grenades, 98 40mm grenades, 52 hand-grenades, 13 illuminate grenades, 90 Avan bombs, 11 RPG7 rockets, 17 kilo plastic explosives, two RPGs, one grenade launcher, 2MP5 six MG, five LMGs, one HMG and two snipers were among the captured munitions. Moreover, four SMGs, a 222 war rifle, a double two bore rifle, six 7mm rifles, two G3 rifles, two pistols and four SMG grenade launchers and other arms also recovered. The Rangers have also arrested two members of Muttahida Qaumi Movement (MQM) South Africa network. The party activists, Mustaqeem and Muqim, were arrested in a raid earlier at the North Karachi Sector-10 area. The Rangers said that the suspect Mustaqim flew to India in 1992 along with Javaid Langra. The suspect got involved in terrorism in 1993 after his return from India, adding that both the suspects were assigned to assassinate a number of political leaders of the city. The arrested two accused were given responsibility of ambush and targeted killing of politicians. They were also entrusted responsibility to prepare a network of MQM South Africa. The captured arms show that they were preparing for a protracted battle, the spokesman said. After completion of the operation Director General Rangers inspected the arms and munitions captured in the raid, the spokesman said. He met with the Rangers personnel and congratulated them for a successful operation. The arrested accuseds were handed over to police for legal proceedings.