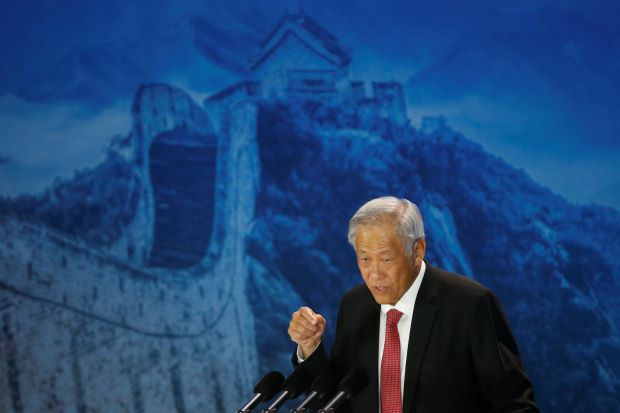 SINGAPORE (Reuters) - Singapore’s defense minister said that Lockheed Martin Corp’s  F-35 fighter jets were the most suitable replacement for the country’s F-16 fleet, and it planned to initially buy a few for evaluation. With Southeast Asia’s largest defense budget, the wealthy city-state is a key prize for global arms companies as it looks to invest in new technology and upgrade its equipment. Singapore’s fleet of around 60 F-16 jets, which first entered service in 1998, will be retired soon after 2030. “They (defense agencies) have decided that the F-35 would be the most suitable replacement fighter,” Defence Minister Ng Eng Hen said in a Facebook post. “We want to procure a few planes first, to fully evaluate the capabilities of the F-35 before deciding on the acquisition of a full fleet.” Ng said defense agencies would speak to their US counterparts to move the process forward, but that it would take 9-12 months to finalize terms on the initial deal. The F-35, one of the world’s most advanced fighter jets, accounts for about a quarter of Lockheed’s total revenue. “We look forward to supporting them on their continued evaluation of the F-35,” a Lockheed spokeswoman said in an emailed statement. The most common variation of the jet, the F-35A, costs around $90 million each, based on contract negotiations with the Pentagon in the United States. While the price has declined with increased production, US President Donald Trump and other US officials have criticized it as too high, and have cited numerous production delays and cost overruns. Other international customers have expressed interest in the F-35. Both Switzerland and Finland have competitions underway to select a new fighter jet. Last year, all Lockheed Martin’s US and international F-35 fighter jets were grounded for engine inspections following a crash of an F-35B on Sept. 28 near Beaufort, South Carolina.