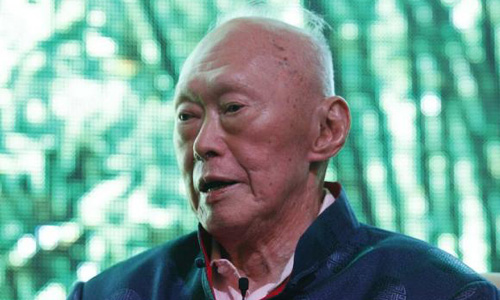 SINGAPORE (Reuters) - Singapore's first prime minister and the man widely credited with the city-state's economic success, Lee Kuan Yew, is still on mechanical ventilation in an intensive care unit in hospital, the prime minister's office said on Thursday. Lee, who turned 91 last September, was admitted to hospital on Feb. 5 with severe pneumonia. "His doctors have restarted him on antibiotics, and are continuing to monitor him closely," the statement said. Although Lee has receded from the public and political scene, his health is watched closely as he is still seen as an influential figure for the government of Prime Minister Lee Hsien Loong, his oldest son. Thursday's statement came after rumours spread on social media on Wednesday night that he may have died. The government did not issue any statement overnight, but the state-owned ChannelNewsAsia and the pro-government Straits Times newspaper published stories that the rumours were untrue. Even Manpower Minister Tan Chuan-Jin posted on his Facebook about the rumours late on Wednesday. "Do continue to pray for his recovery," he said late on Wednesday. Lee, a Cambridge-educated lawyer, is widely credited with building Singapore into one of the world's wealthiest nations on a per capita basis with a strong, pervasive role for the state and little patience for dissent. He co-founded the People's Action Party, which has ruled Singapore since 1959 and led the newly born country when it was separated from Malaysia in 1965. In a book published in 2013, Lee said he felt weaker by the day and that he wanted a quick death.