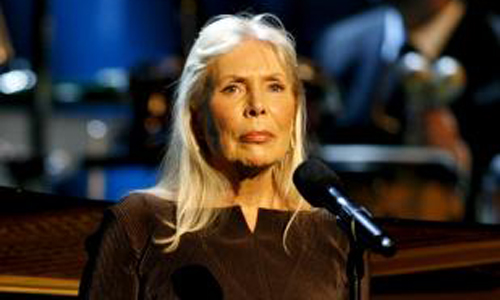 LOS ANGELES - Groundbreaking singer/songwriter Joni Mitchell, one of the stars of the Woodstock era, has been hospitalized, her official website said on Tuesday. "Joni has been hospitalized. We are awaiting official word on her condition and will post it here as soon as we know," a statement on the website said. Celebrity news website TMZ.com reported earlier that Mitchell, 71, was taken to hospital after authorities received a 911 call from her Los Angeles home about an unconscious woman. TMZ said Mitchell was alert on the way to the hospital. Reuters could not independently verify those details. Representatives for the musician did not immediately respond to requests for comment. The Canadian-born Mitchell was inducted into the Rock and Roll Hall of Fame in 1997 and is best known for her highly influential albums in the late '60s and '70s, including "Clouds," "Ladies of the Canyon" and "Blue." She has sold millions of records in a career that led the way for many female artists in the previously male-dominated rock world. - Reuters