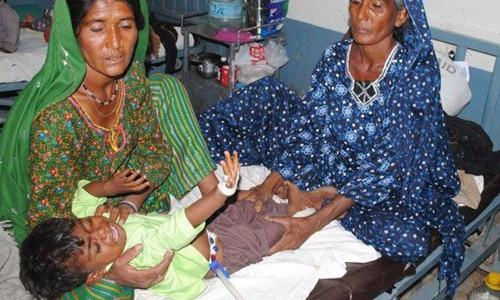 THARPARKAR (92 News) – Six more children died of malnutrition in Tharparkar, raising death toll to 102 in two months. Iqbal Bajeer, Zafarullah, Madad Ali and Cheeno Maghuwar, all newborn, died in Mithi Civil Hospital. The three-year-old daughter of Ali Gul died in Mithi. A six-month-old girl died in Deplo. As many as 52 children are still being treated at Mithi Civil Hospital, while 68 kids are under-treatment in government hospitals of Deplo, Nangarparkar, Chachru and Islamkot. More kids facing malnutrition are being referred to Mithi Civil Hospital due to unavailability of medicines and doctors in remote areas. People say that the Sindh government has taken no concrete step to control deaths of children.