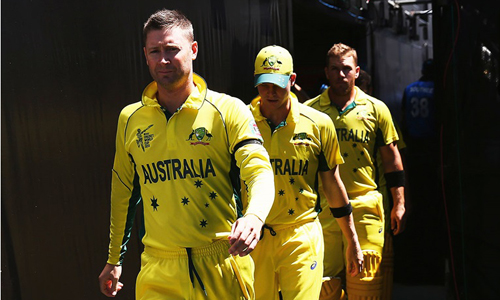 MELBOURNE - Australia's retiring one-day captain Michael Clarke has urged his players to put "skill over emotion" in their bid to down New Zealand in Sunday's World Cup final, though his swan-song is sure to imbue the match with extra sentiment. Clarke announced his retirement from the one-day game on the eve of the MelbourneCricket Ground blockbuster and will hope to wrap up his career in the 50-over format by leading Australia to a fifth world trophy. Clarke's captaincy has proved torrid in recent months, grieving the death of team mate Phillip Hughes and battling a succession of hamstring injuries. His race to be fit for the World Cup overshadowed Australia's preparations, and local media are certain to question the timing of his retirement announcement. Clarke said nothing would change in his preparation for the 245th and final ODI of his career, though his every movement is certain to be under heightened scrutiny. "It's a special game, no doubt about it, but it needs to be about the team and I want it to be about the team," he told reporters at the MCG on Saturday. "I just said it to my team mates then. And I've been the one to come out and say, 'it's not emotion, it's skill that helps you win major games and major tournaments, and tomorrow will be no different'. "It's a wonderful opportunity for every single player in that change room to walk out onto the MCG in a World Cup final. "It's a very special event. But yeah, it's no more special because it's my last game." Brendon McCullum confirmed New Zealand would bring the same team that downed South Africa in a semi-final cliff-hanger in Auckland. Australia are also expected to bring the same side that thrashed India in Sydney, though Clarke could not confirm it. He threw his arm around his New Zealand counterpart McCullum in a private moment during a photo-shoot with the trophy. Both captains have been open about their mutual admiration, and Clarke's mantra about playing with "freedom" could have been straight from McCullum's mouth. "The fact that the whole team is here again today at an optional training session shows the dedication, shows where the team is at mentally," Clarke said. "I don't think I have to say too much to be honest. I think the guys are ready to play. Like I said after the last game, mentally we are ready for this final. "Physically we've got another day to recover or try and get what you need to be right for tomorrow, but I think the team is ready." - Reuters