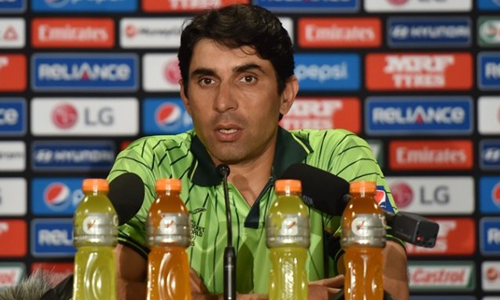 BRISBANE (Reuters) – Misbahul Haq is looking for a confidence-boosting performance from his team but most of all a first victory of the campaign when Pakistan take on Zimbabwe in their third World Cup match on Sunday. Comprehensive defeats at the hands of India and West Indies in their opening two matches have left the 1992 champions rock bottom of Pool B and provoked the usual barrage of criticism from back home. Victory in Brisbane over Zimbabwe, who have beaten United Arab Emirates and lost to South Africa and West Indies, would set them back firmly on the path to the last eight, however. "When you've lost two games in a row in a World Cup, there's a bit of pressure on the players, but I think this is a chance for us to just get our confidence back," Misbah told a news conference at the Gabba. "Zimbabwe is a very good side, everybody knows that they can really come good on any given day. But I think it's our chance. We should just improve our performances, and try to win this game. "That is the only way. If you improve your performances, if you win a game, that could really change the mood of the whole team." Misbah said that the main problem for his team in the tournament so far, apart from the usual sloppy fielding, had been the inability of their bowlers to take wickets in the middle overs of an innings. "Both India and West Indies scored 300 runs," he said. "Then it was really difficult throughout the World Cup when some of the teams score 300-plus runs, it's really difficult to chase it down. "So that's what we need to do. We just have to press all the time, even in the middle overs, to get batsmen out." Talk of 1992, when Pakistan were the surprise winners of the last World Cup to be held in Australia and New Zealand, are destined to dog Misbah for as long as his side remain in the tournament. Imran Khan's side won only one of their first five matches in the 1992 tournament before going on to beat England in the final and Misbah said there was something very simple his team could learn from that campaign. "The important lesson is never give up," he said. "That's what Imran Khan usually says about 1992. Even when the team was in difficult times, they never gave up. They just kept trying, kept trying, and kept trying. "At last they just managed to do what they really wanted to do in that World Cup. So, that's what we are trying to do."