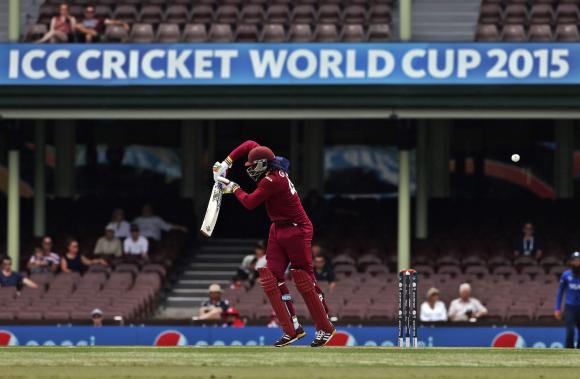 MELBOURNE (Reuters) - Despite a poor start to the World Cup and eight innings since his last one-day international half-century, West Indies opener Chris Gayle is "awake" and ready to fire up the Caribbeans with a big score, according to captain Jason Holder. Gayle managed a scratchy 36 from 65 balls in the opening loss to Ireland and scored four in Saturday's big win over Pakistan. Though the win over Pakistan was a relieving return to form for the under-pressure islanders, Gayle's second World Cup failure overshadowed it, with board president Dave Cameron re-tweeting a post from a Twitter user suggesting the 35-year-old should quit. "Gayle goes... Can't buy a run. Let's give him a retirement package ... Can't fail repeatedly and still front up based on reputation," read the post, re-tweeted by Cameron during play. Cameron later tweeted an apology but it did little to dismiss the impression that tensions still exist between players and administrators months after a contracts dispute scuppered a lucrative tour of India. Given the hard-hitting Gayle has not scored a one-day century in 19 innings, his last coming in mid-2013, the tweet may have had some currency among West Indies fans. On the eve of West Indies' third World Cup match against Zimbabwe in Canberra, Holder said he was "fully confident" the opener was primed to turn things around. "Chris is awake. I can assure you he's awake. He was awake from the beginning of the tournament," Holder told reporters at Manuka Oval. "Every time I see Chris Gayle, I expect to see one Chris Gayle, and that's a positive Chris Gayle. "Although he hasn't been getting runs, we still have a lot of confidence in him. I just hope that he can come tomorrow and just get us in and just take it as deep as possible for us." West Indies' top order has failed in both their World Cup matches, but the team has still posted 300-run scores due to rescue efforts by the middle order. West Indies have won their last seven matches against Zimbabwe and should be too strong for the Africans at Manuka Oval if their batsmen and bowlers gel. "I think we still have room for improvement," fast bowler Holder said. "If we can get a few more contributions going deeper into the innings in terms of the top order, I think we can get close to 350 plus, and I think that is not beyond us because of our firepower in the middle and the end."