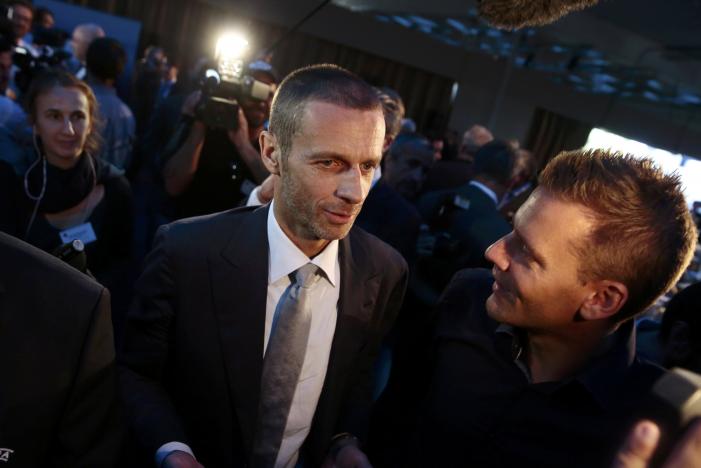 ATHENS - Aleksander Ceferin, the president of Slovenia's football federation, was overwhelmingly elected as the new head of European football's governing body UEFA at an extraordinary Congress on Wednesday. Ceferin, 48, beat Dutchman Michael van Praag, the only other candidate, by 42 votes to 13 and will succeed Frenchman Michel Platini, who announced his resignation in May after being banned from football for four years for ethics violations. Ceferin, who is not a member of UEFA's executive committee, was little known outside his own country until he announced his intention to run in June. "I am not a showman, I have no ego issues and I am not a man of unrealistic promises," he told delegates before the vote. Each of UEFA's 55 member associations had one vote in the election. He added that the "wind of change" was blowing through European football. Both candidates had promised to help the smaller countries and leagues in the face of a growing divide between a handful of rich clubs and everyone else Both agreed that the process which led to last month's reformulation of the Champions League in favour of clubs from big countries was flawed and said they would fight any attempt to set up a breakaway Super League. Ceferin did not say, however, whether he would review the decision. The Slovenian did say though that he would look again at the new structure of the European Championship, with matches spread across several countries leading to semi-finals and final in one place, which comes into place in 2020 and was the brainchild of Platini. "It's a great honour but at the same time a great responsibility," said Ceferin after the decision was announced by acting president Angel Maria Villar. "My small and beautiful Slovenia is very proud about it and I hope that one day you will also be very proud about it." Van Praag said: "Alex and myself have the same goal, look at our programmes. He wanted to do it his way and I wanted to do it my way and today democracy has spoken." -Reuters