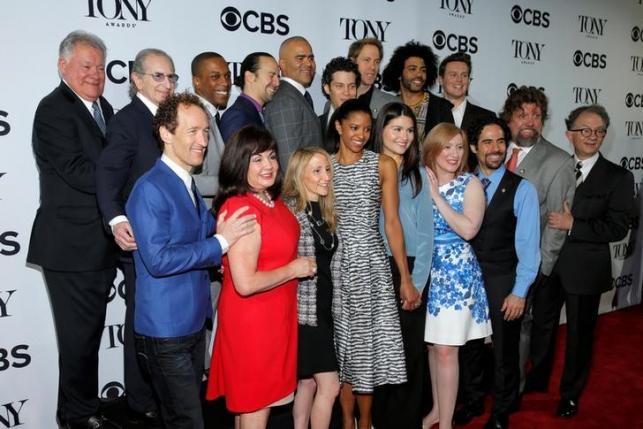 NEW YORK - "Hamilton", the pop culture phenomenon based on US founding father Alexander Hamilton, swept the Tonys on Sunday, winning 11 of Broadway's top awards including best musical, best actor, best direction and best score and book for creator Lin-Manuel Miranda. The musical, which tells the story of the ill-fated Hamilton with a deft musical melding of hip-hop and rap, R&B, ballads and traditional Broadway showstoppers, also won for featured actress and actor and several technical awards. A somber note was cast over the festivities by the attack on a gay nightclub in Orlando, Florida early on Sunday that killed 50 people and wounded 53. Several winners spoke of the tragedy in their acceptance speeches. Jessica Lange, winning her first Tony as morphine-addicted Mary Tyrone in "Long Day's Journey Into Night, said the honor "fills me with such happiness, even on such a sad day as this." Host James Corden opened the usually ebullient show with a statement to victims and others affected: "Your tragedy is our tragedy ... hate will never win." "Tonight's show stands as a symbol and a celebration of that principle," he said. Miranda, accepting best score for a musical, delivered a sonnet for his acceptance, done in the style of verse heard in "Hamilton". "Senseless acts of tragedy ... times of hate," he said, his voice breaking as he ended with "love is love is love, cannot be killed." Miranda also won best book of a musical. Backstage, Sir Andrew Lloyd Webber said: "No child is ever born to hate." Frank Langella, who won his fourth Tony for best actor in a play as an Alzheimer's-afflicted patriarch in "The Father," said the theater community stood in support. "I urge you, Orlando, to be strong," Langella said. "The Humans" won the Tony for best play, while Jayne Houdyshell and Reed Birney were named best featured actress and actor in a play for the family drama. It also won for scenic design. "The Color Purple" took best revival of a musical, while star Cynthia Erivo took the Tony for best actress in a musical. Other winners included Ivo van Hove, best director of a play for "A View from the Bridge," which also won best revival of a play. Miranda, who plays Hamilton, lost best actor in a musical to co-star Leslie Odom Jr. as his nemesis Aaron Burr. "God bless you, you've given us a new vision," he told Miranda. Backstage, Odom spoke of the US shootings, saying "something like this happens and all of this seems pretty silly." However, he said at the matinee earlier that the cast realized people who had tickets for months were counting on seeing the show. "We can't let them (the killers) take that away from those people," Odom said. "Hamilton" also won awards for Renee Elise Goldsberry and Daveed Diggs as best featured actress and actor in a musical, best director Thomas Kail, and for best lighting, costumes, choreography and orchestrations. But it fell short of the 12 Tony wins by "The Producers" in 2001. Barbra Streisand, making her first Tonys appearance in 40 years, presented the best musical award to the show. In a year when the Oscars drew criticism for lacking non-white nominees, the Tonys, led by the multicultural cast of "Hamilton," stood rich with diversity. Corden joked that the Tonys were "like the Oscars - but with diversity." -Reuters