Smith called to give up captaincy as CA launches probe 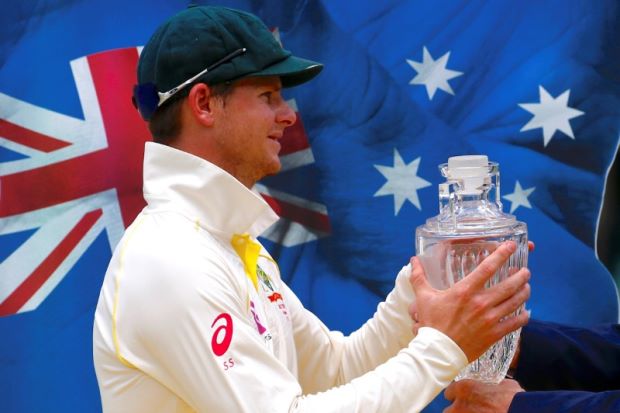 Smith called to give up captaincy as CA launches probe

MELBOURNE (Reuters) - Cricket Australia will not rule on Steve Smith’s future as captain until it completes a probe into stunning ball-tampering revelations that have plunged the Test team in crisis, CEO James Sutherland said on Sunday.

Sutherland’s comments came as a shocked nation digested reports from South Africa that Smith and senior players conspired to change the condition of the ball using sticky tape and grit from the pitch during the third Test in Cape Town.

Former players and pundits have called on Smith to step down immediately, describing his position as “untenable”.

Sutherland, however, said the 28-year-old would continue to lead the side while the investigation played out.

“Steve Smith is currently the captain of the Australian team,” Sutherland told reporters in front of a huge media scrum outside the Melbourne offices of Cricket Australia (CA).

“We are working through a process and once we have a clearer picture of the facts and understand things once (CA head of integrity) Iain (Roy) submits his report we will be in a better position to make further comment.”

Smith, who has led the team since 2015 and is the team’s best batsman, confessed to reporters in Cape Town on Saturday that the ball-tampering had been orchestrated by himself and senior players.

Opening batsman Cameron Bancroft, the most junior member in the side at 25, was tasked with implementing the plan and was duly caught on camera using the tape.

He has been charged by the International Cricket Council (ICC), which could lead to a one-match ban and a 100 percent fine of his match fee.

The cost to Australia’s reputation is immeasurably higher, however, with former players across the globe branding the team as cheats and fans castigating the players on social media.

Michael Clarke, Smith’s predecessor as captain, said the revelations were “disgraceful” and that he had no doubt that the skipper would be “crying in his hotel room”.

“I can’t believe the senior players have made a decision to do that,” he told Australian television. “It’s disgraceful and it’s not accepted by anyone.”

“Unfortunately this is blatant cheating and Steve Smith will have to step down as Australian captain,” Hogg said on Twitter.

Former England captain Michael Vaughan hit out at the decision to use Bancroft to carry out the plan.

“What I find appalling in all this is the youngster got given the job,” he tweeted.

“Was it because someone in the team had been accused of using Hand tape for a similar affect !!!!!!! So they wanted someone else to take the mantle.... Disgraceful behaviour by senior pros.”

However, the long-serving CEO declined to call the ball-tampering “cheating” and steered studiously clear of using the word.

“Look, I think it’s pretty clear that ICC match referee has made a charge,” Sutherland said.

“A player (Bancroft) has admitted to that... I’ll make a judgement on that in the next couple of days.”

“We actually expect of Australian cricketers behaviour that we do not expect of players in other (sporting) codes.”

Australian newspapers described the scandal as the worst captaincy crisis since 1981 when skipper Greg Chappell instructed younger brother Trevor to bowl underarm with the last ball in a one-day match against New Zealand to secure a victory.

“What took place at the foot of Table Mountain was dumb and deplorable in equal measure,” wrote Fairfax Media’s Chris Barrett.

“In the case of Smith, he should have known better... The mistake may cost him very dearly.”

Former captain Allan Border said it was a “a bad look for Australian cricket”.

“Certainly, it will go all the way through to Cricket Australia,” he said commentating on broadcaster Supersport.

“The directors will get involved. It’s that serious.”