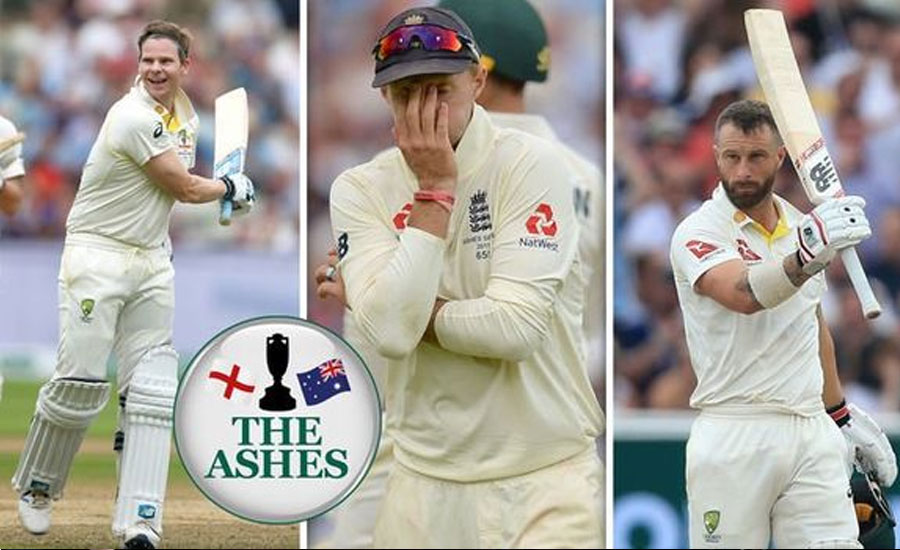 BIRMINGHAM (92 News) – Steve Smith hit his second century of the Test match, and Matthew Wade also notched a ton, as Australia seized momentum and opened up a formidable lead over England in the first Test at Edgbaston.

Smith (142) became the first player to record twin Ashes hundreds since Matthew Hayden in 2002, as he and Wade put England to the sword on a frustrating day in the field for Joe Root’s side. The declaration came at 487/7, but the visiting side were unable to make any inroads with the ball as Rory Burns and Jason Roy fended off seven overs in the evening.

The bowlers toiled to relatively little avail throughout the day, Moeen Ali bowling 29 overs for a return of 2/130, and the home side seemingly missing the presence of James Anderson, who left the field of play on day one with a calf injury. Australia accumulated at a brisk rate, adding 363 to their overnight score of 124/3, all but dashing England's chances of winning the match.

Australia had begun day four with a lead of 34, and Travis Head provided the perfect foil for Smith in the morning session, recording his half-century in a stand worth 130. Smith batted in dominant fashion, bringing up his tenth Ashes century shortly after the lunch interval as the tourists began to open up a big lead.

Head then nicked off to Stokes, leaving Australia 205/4, allowing Wade to come in and carry on where his compatriot had left off. Another sublime partnership ensued, Wade and Smith combining for 126, before the imperious Smith finally edged behind to Bairstow, Chris Woakes (1/46) getting the prized scalp.

Wade (110) then reached three figures in Test cricket for the first time in six and a half years, striking powerfully and with great confidence before holing out to deep mid-wicket, gifting Stokes his second wicket of the day.

Close of play at Edgbaston and a huge task ahead of England tomorrow to save the first Ashes Test match.

Tim Paine eventually called for the declaration late on in the final session, after James Pattinson (47*) and Pat Cummins (26*) had excited the touring fans with some impressive hitting, England once again unable to clean up their opposition's tail. Roy and Burns prevailed unscathed though, having held off the Aussies for seven overs late in the evening session to go into day five on 13/0. The hosts require a further 385 runs to claim victory in this first Test, as a gripping final day is in prospect.