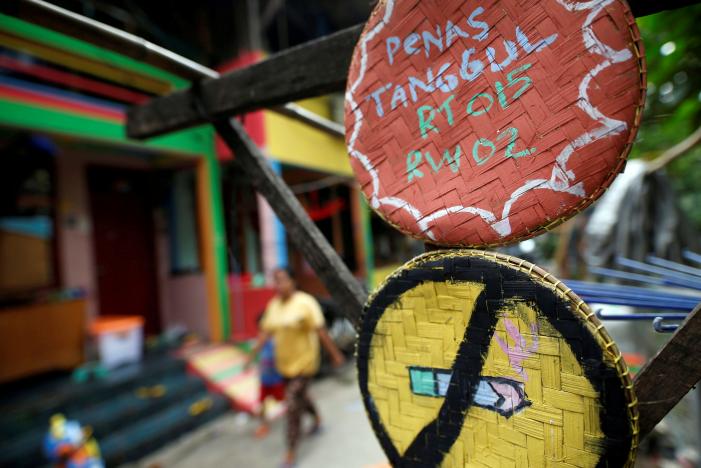 JAKARTA – A neighbourhood in the Indonesian capital has informally declared itself a smoke-free zone as students plan further protests against what they see as an increased effort by cigarette companies to target the young.

Indonesia has one of the highest rates of smoking and is the world's fourth-biggest cigarette producer, mostly of the pungent "kretek" clove and tobacco variety, but parliament has proposed a law to boost tobacco output further.

A few groups are now pushing back against Big Tobacco in the country of 250 million people where nearly two-thirds of men smoke and a cigarette pack can cost less than $2.

In eastern Jakarta, a row of at least a dozen houses at the Penas Tanggul neighbourhood were painted with bright colours in March, with a blue banner hung near the entrance declaring it a smoke-free zone.

Residents there have been encouraged to stop or to avoid smoking "so this neighbourhood will not just be beautiful, but also healthy", said Nobby Sail Andi Supu, a 22-year-old student who coordinated the programme with a civic group.

More than 200 people, mostly students, held a protest last month to oppose an upcoming industry exhibition of cigarette-making machines in Jakarta and is planning another rally next week, said Manik Marganamahendra, one of the protest organisers.

Cigarette companies are targeting young Indonesians with new products such as fruit-flavoured cigarettes, as well as attractive packaging and advertisements, the 20-year-old Marganamahendra said.

"We actually want the cigarette industry to totally disappear, but it can't happen overnight," he told Reuters. "We would like to remove the dependence of the Indonesian people on cigarettes."

Despite health concerns, the tobacco industry is often defended in Indonesia by politicians and others as an important source of income for farmers and revenue for the government.

Indonesia produced 269.2 billion cigarettes in 2015, according to research firm Euromonitor International. The market was valued at 231.3 trillion rupiah ($17.3 billion) and growing fast.

At Penas Tanggul, 18-year-old high school student Kholid Wahyudi said he felt the pressure to cut back on smoking after his neighbourhood went smoke-free.

"I feel embarrassed here, especially when I'm with my friends who don't smoke," Wahyudi said. "I used to smoke a pack of cigarettes a day, but now I can reduce it to two to three sticks."

Underscoring the challenge of spreading the anti-smoking message to other parts of Indonesia, several construction workers near Penas Tanggul were seen puffing away. –Reuters