LORD’S, London (92 News) – A combined batting performance studded by Haris Sohail's 59-ball 89 was backed up by the bowlers as Pakistan kept their hopes of progression at the ICC Men's Cricket World Cup 2019 alive with a 49-run win against South Africa. Chasing Pakistan's 308/7, South Africa came undone against Mohammad Amir (2/49) and Shadab Khan (3/50) to remain with just one win from seven games so far. The World Cup caravan reached the Home of Cricket on Sunday, 23 June, and Imam-ul-Haq and Fakhar Zaman treated the packed crowd at Lord's to a series of glorious drives. The team fifty came in quick time, taking just 44 balls and including 38 runs in boundaries. Lungi Ngidi came in for particular punishment, Fakhar dispatching him for a big six over midwicket. Chris Morris created a chance with Fakhar on 28, Imran Tahir diving forward to take a catch. With replays inconclusive, the umpires gave the batsman the benefit of the doubt. Tahir took matters into his own hands, however. In his first over, Fakhar's attempted scoop ballooned up to the waiting Hashim Amla fielding at first slip; then, the veteran leapt to his right to complete a good low catch of Imam as both set batsmen were sent packing. Babar Azam looked good in reaching his half-century, but it was Sohail who took apart the bowling. Playing only his second World Cup 2019 match and coming in at 143/3, he opened up with a four through covers off Kagiso Rabada, before slamming the same bowler over point for six. An 81-run stand with Azam was followed by a 71-run fifth-wicket partnership with Imad Wasim. Before Wasim chipped in with 23 off 15, Sohail had dominated, bringing up a half-century in just 38 balls. Hashim Amla, who has been in indifferent form, was dismissed on Amir's first ball, after a successful review for Pakistan showed the delivery hitting leg. Quinton de Kock and captain Faf du Plessis gave South Africa their best period of the game during a partnership of 87. But with Shadab bowling full and in line, and Amir finding swing, they proved to be a handful. De Kock was well caught in the deep while attempting a slog sweep, Aiden Markram was done in by one that kept low and straight – both off Shadab – and du Plessis' top-edge off Amir found Sarfaraz. Rassie van der Dussen and David Miller got starts, but with moments of excellence in the field making up for plenty of missed chances, Pakistan never let the game get away. Wahab Riaz was on point with his yorkers and took three lower-order wickets in wrapping up an all-round satisfying day. Two Wahab Riaz deliveries were dropped by Sarfaraz and Amir in the 37th over (Pakistan have dropped a whopping 7 catches this innings). But by then, chances of a comeback by the Proteas appeared to be fading, with the middle-order fighting back dutifully ─ but unsuccessfully ─ to bring up their run rate to the required 10.84 as the side tried to meet the the target of 141 runs from the remaining 78 deliveries. 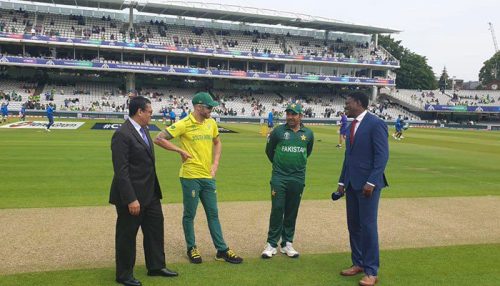 Earlier, Pakistan won the toss and elected to bat first against South Africa in 30th match of World Cup. Pakistan needed to win all four of their remaining matches, and rely on the outcome of a few other matches, in order to have a shot at making it to the top four. “Looks like a good batting pitch and some grass cover on it,” Sarfaraz said after winning the toss. “We are not thinking about the pressure, just focusing on the game, which is very important for us.”

Pakistan are currently ranked number nine on the World Cup points table, just above Afghanistan with one win (against England), three losses (against West Indies, Australia and India), and one washout against Sri Lanka. South Africa have very slim chances of making it to the top four after having lost four out of their six matches so far. With one win and one washout in addition to the four defeats, the Proteas are one spot above Pakistan at number eight.
Pakistan will aim for an improved performance as they face a must-win situation against South Africa at Lord’s. South Africa’s chances of progressing to the ICC Men’s Cricket World Cup 2019 semi-finals seem all but over after their narrow loss to New Zealand on Wednesday. While their bowlers have troubled the opposition in each of the previous three occasions, the batsmen have failed to give them enough runs to play with. The Faf du Plessis-led side will look to produce performances similar to that of their series win against Pakistan earlier this year, when they take the field on Sunday. After producing contrasting results in their first two matches, Pakistan’s performance has slipped in their last two games. While a batting failure handed them a 41-run defeat against Australia, lack of intensity and consistency in all the three departments resulted in an 89-run defeat against their arch-rivals, India. Mohammad Amir has created an impact in his each outing so far, but has got little or no support from the other end. The batting too, barring the game against England, has failed on a consistent basis. Repeated failures of their experienced middle-order batsman Shoaib Malik might mean that Pakistan consider Haris Sohail for a spot in the playing eleven on Sunday.

Babar Azam (Pakistan): Babar Azam has shown flashes of brilliance throughout the World Cup so far, but is yet to put up a three digit score. Pakistan’s top ranked batsman in MRF Tyres ICC ODI Rankings, who scored a fluent 63 in his side’s only victory (against England) in the tournament so far, will have to shoulder the responsibility against a potent South African bowling unit. Hashim Amla (South Africa): The veteran batsman has got starts in his last two games, but hasn’t quite been at his fluent best at the World Cup. Amla, whose last ODI hundred came against Pakistan earlier this year, will look to play a long innings on Sunday.

There will be intervals of clouds and sunshine with humidity and dryness through the day. Spinners had an impact in the second innings in the last ODI played at Lord’s in July 2018, and the dryness might once again help the slower bowlers as the game progresses on Sunday.