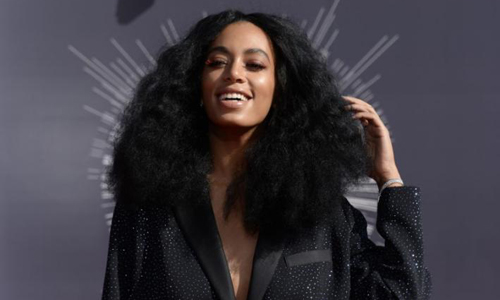 LOS ANGELES- Singer Solange Knowles, sister of R&B star Beyonce, topped the weekly U.S. Billboard 200 chart on Monday for the first time, with her latest album, "A Seat at the Table," edging out new records from Bon Iver and Van Morrison.
Knowles' third record, "Seat at the Table," sold 46,000 albums, 26,000 songs and was streamed 35.7 million times in the week ended Oct. 6, totaling 72,000 album units, according to figures from Nielsen SoundScan. The album has garnered strong praise from critics, and features 21 tracks that touch on race and femininity, fusing R&B, soul and funk sounds. Grammy-winning Bon Iver's latest album, "22, A Million," came in at No. 2 with 58,000 albums, 10,000 songs and 17.5 million streams, totaling 71,000 album units. The Billboard 200 album chart tallies units from album sales, song sales (10 songs equal one album) and streaming activity (1,500 streams equal one album). While Bon Iver's record sold more physical albums, it was edged out by Knowles' album on the strength of streaming. Veteran Irish singer-songwriter Van Morrison was the only other new entry in the top 10 of the Billboard 200 chart this week, debuting at No. 9 with "Keep Me Singing." On the Digital Songs chart, which measures online single sales, The Chainsmokers' catchy summer song "Closer" featuring Halsey continued to reign as No. 1, selling 123,000 copies in the past week. -Reuters