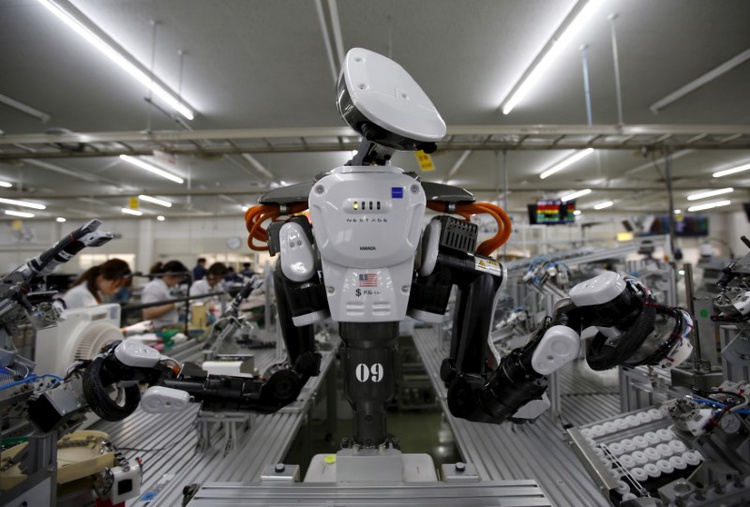 TOKYO (Reuters) - Business confidence among Japan’s big manufacturers worsened for a second straight quarter in the three months to June, a Bank of Japan survey showed, with the outlook clouded by US trade protectionism and rising input costs. It was the first time since Prime Minister Shinzo Abe swept to power in December 2012 that manufacturers’ morale has soured for two straight quarters, raising worries that his reflationary “Abenomics” policies may be sputtering. Industrial sectors such as cars and oil dragged down the overall mood, adding to concerns that US President Donald Trump may target auto imports from Japan and other trading partners for protectionist tariffs after imposing stiff duties on steel and aluminum. The quarterly BOJ tankan’s headline index of plus 21 undershot the median estimate of plus 22 in a Reuters poll of analysts, and is expected to stay flat over the next three months. Still, the survey also showed that big firms plan to raise their capital spending by 13.6 percent in the financial year starting April 2018, handily beating economists’ median estimate of a 9.3 percent gain. “Manufacturers’ sentiment is leveling off while capital expenditure holds firm. I’m watching how fears of trade protectionism may affect corporate capex planning from now on,” said Masaki Kuwahara, a senior economist at Nomura Securities.

Big manufacturers plan to increase capital expenditure by 17.9 percent this fiscal year, the fastest gain for June surveys since 2015, the tankan showed. Large non-manufacturers plan to raise capex by 11.2 percent, making it the fastest increase for June surveys since 1990 during the peak of the bubble economy. Economists expect capital expenditure will be supported by the need to upgrade production capacity and invest in labor-saving equipment to cope with labor shortages, and an infrastructure boom ahead of the Tokyo Olympic Games in 2020. A Bank of Japan official noted that although big firms’ investment capex plans came out strong at the start of the new fiscal year, they could be revised down as the year progresses. A private survey showed on Monday that Japanese manufacturing activity grew at a slightly faster pace in June, but export orders fell more than initially reported, an unwelcome sign of the potential impact of a trade war between the United States and major economies.

The central bank will scrutinize the tankan results at its rate review later this month, at which its nine-member board will conduct a quarterly audit of its long-term growth and price outlook, and analyze factors behind subdued inflation. Policymakers and Japanese firms also worry that trade friction and potential gains in the safe-haven yen could undermine export-led growth. The latest tankan showed big manufacturers set their expected dollar/yen rate at 107.26 for this fiscal year, compared with 109.66 seen three months ago, underscoring corporate caution about renewed yen strength. The dollar stood at around 111 yen  in the early Monday trade. “Some manufacturers are worried about the yen rising, and this hurt their sentiment. Companies may be worried about some change in monetary policy or about the yen rising due to risk aversion,” said Hiroshi Miyazaki, senior economist at Mitsubishi UFJ Morgan Stanley Securities. “The tankan shows the economy remains on solid footing, but it is not strong enough to allow the BOJ to head for the exit.” Large non-manufacturers’ sentiment stood at plus 24 in June, slightly above a median forecast of plus 23, up one point from the previous quarter. It was seen worsening to 21 in September. The tankan’s sentiment indexes are derived by subtracting the number of respondents who say conditions are poor from those who say they are good. A positive reading means optimists outnumber pessimists. Japan’s economy is expected to rebound in the second quarter from a contraction in the first quarter that ended the longest growth streak since the 1980s bubble economy.